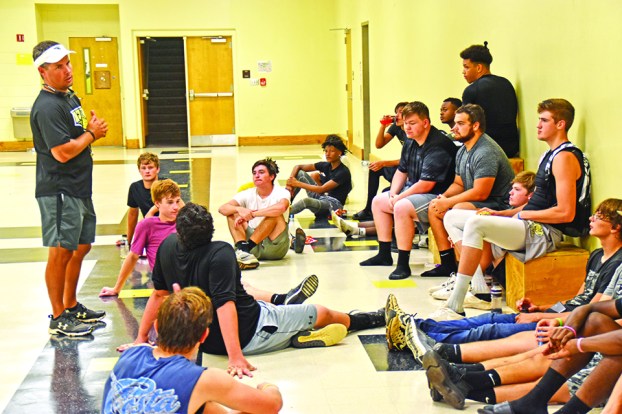 ANNOUNCEMENTS: Beulah head football coach Cody Flournoy speaks with the team after Wednesday’s joint practice with Russell County about the team’s schedule for the rest of the summer. Photo by Rashad Milligan

BEULAH — The football Bobcats of Beulah High School hosted Russell County on Thursday morning for a joint practice. The 7-on-7-styled practice began at 8 a.m. CDT to keep the conditions as cool as possible.

“The big thing is that 7-on-7’s not true football but it gives you an opportunity to see guys run, move and compete,” Beulah head football coach Cody Flournoy said. “It helps our quarterbacks and defensive backs the most but to me it’s competition. To see guys go out there and compete when it’s hot and they get tired, who’s going to step up and make a play when one needs to be made?”

Bobcats sophomore Caleb Abney took the lead role of quarterback for Beulah at the competition because senior starter Lonzie Portis is away at an academic camp for the month of July.

Another important part of 7-on-7 competitions is that the offense gets a chance to see different defenses from other schools when they run the same plays they were running all summer, Flournoy said.

“Russell County ran a Wing-T typeset,” Flournoy said. “They had a tight end in the wing in motion for most of their formations, which gave us something to look at defensively. It’s the same thing on offense. Some teams are better at man coverages, some teams playing different types of zones against you and adjust differently. We get to see different formations, see different types of players and try to figure out how to attack those guys.”

Although only helmets and no tackling are allowed in the 7-on-7 format, Beulah still had a very physical day with the visitors for two hours.

After the practice, Russell County left and the Beulah players stayed on the first floor of Southwell Gymnasium in a spacious room for a voluntary character-building session. Former Beulah athlete Rusty Arnett continued his summer series with the players of breaking down the acronym of M.A.N.H.O.O.D. Thursday was the day to break down the letter “H,” which stood “handling your business.”

Arnett encouraged the players to not look at what their teammates are doing as an excuse for not giving their full effort. He encouraged the team to be the best version of themselves despite whatever is going on around them.

“Do we want to do what’s right,” Arnett asked the players sitting on the floor in the room, “or do what culture tells us to?”

In the previous three days, Arnett taught the players that “M” stood for Master, “A” stood for ask for guidance and “N” stood for never compromising to do the right thing. Although Arnett said that he got the acronym from the book “The Two-Minute Drill to Manhood: A Proven Game Plan for Raising Sons,” he’s keeping the last three letters a surprise for the team.

The group of teens was alert during the 10 a.m. session, giving Arnett eye contact and their full undivided attention after practicing in the summer heat for two hours. This was the fifth year Arnett returned to his Alma Mater to conduct these sessions, he returned last year after a four-year gap when Flournoy was hired as the head coach and invited him back out.

“It takes a lot of guys to run a good program,” Flournoy said. “If we had a good manager, a good football coach, good parents, administration, even custodians and everything else. It takes a lot to make this thing roll and flourish like you want it to and like what the community wants to see. Rusty’s a big part of that and that’s why we keep him around.”

Beulah is only allowed to work out as a team next week for AHSAA All-Star Week.

The Bobcats are afforded one more week where competition is permitted before having a short final summer week of workouts to prepare for the school year. Once the academic semester begins, the team is permitted to begin fall practices in full uniform.

Beulah’s first game of the season is on Aug. 24 at Loachapoka.