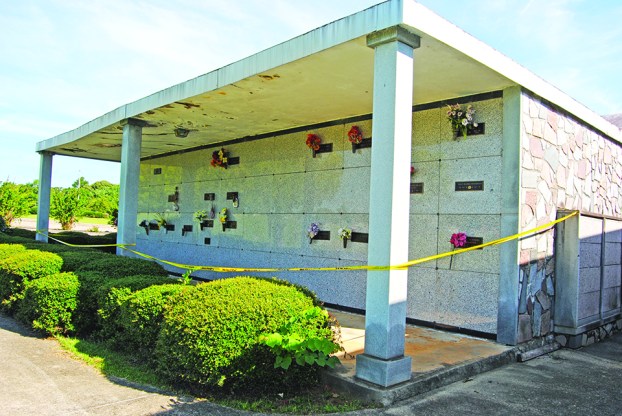 LANETT — An assault incident is shining a light on the cleanup and maintenance efforts of Resthaven Memorial Gardens in Lanett.

The management of the cemetery has been the subject of much uncertainty – and some raw feelings – for a long time now, with the financially-plagued cemetery recently declaring bankruptcy. The cemetery is now owned by a bank in Salt Lake City, Utah. There is a local property manager and a work crew from the Chambers County Sheriff’s Office that keeps the grass cut on an as-needed basis, but repairs and road work are still an ongoing issue.

The lingering uncertainty of Resthaven has heightened frustrations among many who have loved ones buried there. On Thursday, those long-simmering emotions erupted with the Resthaven property manager being struck by an angry individual and a police presence was required to calm things down.

Thursday’s conflict came about due to a Resthaven rule that the Sheriff’s Office grounds crew could remove worn, faded or unsightly items from the cemetery. The rule has been in effect for well over a year, but hasn’t been strictly enforced until recently. When word got out that items were being taken from graves and discarded, some people reacted in anger. Others liked the move, believing it made for a more attractive setting.

At some point on Thursday, emotions boiled over to the point that Lanett police officers were summoned to the scene. Property Manager Lynn Inman was attempting to explain what was going on to people who had strong feelings on both sides. Gator Kincaid, who was making a live report of the incident, was asked to leave the immediate area. He continued reporting on the incident at a location across Highway 50.

As Inman continued to explain what had been going on, she was slapped by a woman who had complained that an angel had been removed from the grave of her loved one. With this happening right in front of police officers, Kathy McClellan, 58, of Valley, was arrested on a charge of physical harassment. She was later released.

Inman was not injured, but continued to be the target of personal attacks. She reported receiving harassing phone calls from anonymous people.

“I have loved ones here, too,” she said, adding that the purpose of the rules is to ensure the cemetery will be an attractive place for everyone. The only items being removed from graves are those that have been outside for an extended period and have become faded, worn and tattered, she said.

Interim Police Chief Johnny Wood said that he’d talked to people at the cemetery on Thursday who appreciated the efforts to remove unsightly items.

A sign posted at the cemetery states that the rules are in effect to maintain a uniform and professional appearance for Resthaven and to show the utmost respect for families and their loved ones. The rules include:

› The planting of shrubs, trees and flowers is not permitted. Any unauthorized planting will be removed.

› Items placed on a memorial marker of interest must be placed on the marker, or they are subject to removal.

› Only approved memorial markers may be used. Those not needing cemetery requirements are subject to removal at the owner’s expense,

› The following items are not allowed in the cemetery: benches, fencing, iron stands, pots, statues, glass items, bricks or any other items.

WEST POINT — Last fall, Abby Brumfield didn’t know if she was going to be able to cheer again. She... read more