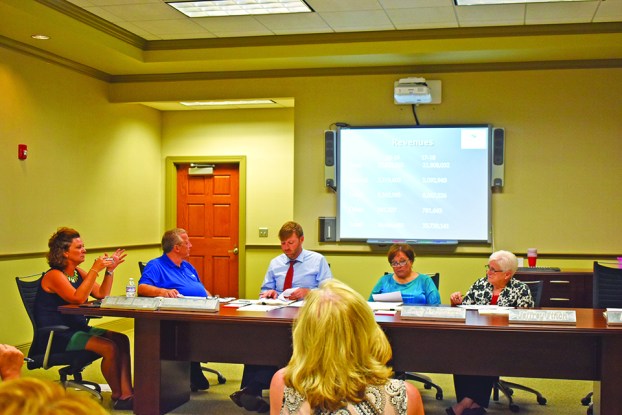 BUGETING: The Chambers County School Board spent Wednesday evening going over the budget for the 2018-2019 fiscal year

LaFAYETTE — The Chambers County School District laid out the budget for the upcoming school year during its Wednesday night meeting.

Superintendent Dr. Kelli Hodge sat at the head of the board table and presented the proposed budget, starting with 2018-19 expected revenue numbers.

“In state revenue for the upcoming fiscal year we are looking at $22,822,555,” she said. “That’s about 62 percent of our (total) projected revenue, which is up a little over a million dollars from last year. Most of that is due to a 2.5 percent pay raise, but also increased textbooks, technology and all those kinds of things.”

The school board is also expecting $5.1 million in federal revenue. This money is received for title programs, special education, career tech programs and the like. Federal money makes up about 14 percent of total overall revenue.

Twenty-three percent of the revenue will come from local sources, totaling $8.3 million.

In total, the school district is expecting $38.3 million in overall revenue, an increase of $462,000 from last year’s budget.

The total expenditures for the upcoming year outweigh this $38.3 million number, something that Hodge ensured the board was being handled.

“Revenue is just over $38 million and expenditures are just over $39 million,” she said. “We aren’t crazy, we also have reserves and will not spend every single dime that we have this school year. We are also still working on the budget to be able to cut some things out.”

The biggest expenditure for the school system is $18 million — 47 percent — for instructional spending. Teacher’s salaries come from this number, which has increased since last year’s budget thanks to the pay raise for teaching staff.

The other usual expenditures include $5.9 million for support staff, $2.9 million for operations and maintenance and $5.6 million for auxiliary pay, which includes transportation.

A $200,000 expenditure was budgeted for this fiscal year, with that money being used to replace the outdated and energy inefficient windows at LaFayette Lanier Elementary with ones that will save the historic school in energy costs in years to come.

Also at the meeting, the school board voted unanimously for W.F. Burns Middle School to pay a stipend for special education teachers who helped with the scheduling for the high number of special education students coming into sixth grade.

“Burns has had a large number of special education students, almost 70 in this upcoming sixth grade, so Dr. Bell just really needed someone with a true special education background to help her with that scheduling,” Hodge said. “She wanted to compensate them for the time they spent helping her get those schedule straightened out for those students.”

City of Lanett project ahead of schedule

LANETT — The streetscape project in downtown Lanett is running ahead of schedule. According to Planning and Development Director Tony Chandler,... read more