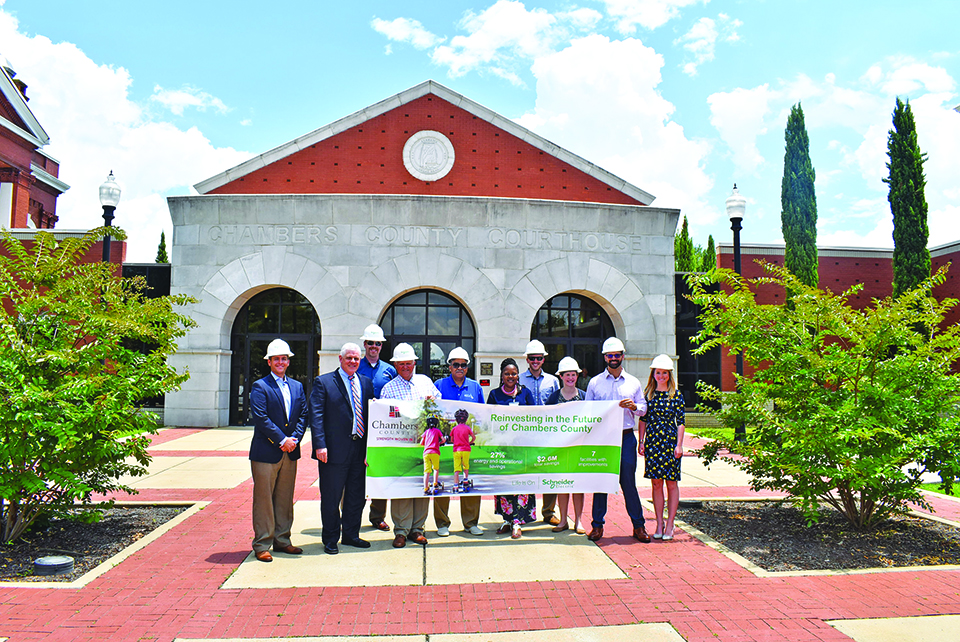 KICKOFF: Members of Chambers County Commission stand with representatives from Schneider Electric to celebrate the partnership between the two.

CHAMBERS — After being unanimously agreed upon in early June, the partnership between Schneider Electric and Chambers County kicked-off Wednesday afternoon.

After meeting with the company to discuss implementation plans and have a quick lunch, commissioners dawned Schneider-branded hard hats to officially and publicly initiate the work that will be done.

“Over the next several weeks and months you are going to start seeing upgrades going on around county facilities,” said Senior Program Manager Kyle Keith.

Schneider is a nationwide energy management company that improved upon energy efficiency for organizations, municipalities and even the Chambers County School District. In this new, $1.7 million partnership with the county, Schneider will create $2.6 million in savings over a 20 year period — equaling $133,000 a year.

“The beauty of this is that Chambers County will recoup the investment that they’re making in regards to these capital projects and agreements in the form of a reduction in utilities,” County Attorney Skip McCoy said.

The savings will come from simply improving facilities around the county, starting with the courthouse, Lanett Annex and Agricultural Arena. New LED lighting, energy efficient windows, conservative doors and improved HVAC systems will allow the commission’s contract with Schneider to pay for itself.

“The interesting part about this is that it is all being funded through operational reductions,” Keith said. “This is a way for the county to modernize all their facilities with dollars that are already being spent on utilities and operations. We help counties get creative with the dollars that they do have and stretch them to get the things that they really need and to develop solutions that will be in line with their vision.”

Construction will begin mid-to-late August and bring in newer, brighter LED lights to the outside and inside of the courthouse, something the commission believes will not only add to the area’s aesthetics, but its safety as well.

“The first aspect of the contract called for the lighting because we wanted the people to be able to see an immediate difference,” McCoy said.

Saving the county money and adhering to the prospect of staying green are the operative terms in this agreement. Chambers County residents should expect so see these changes within the next month.