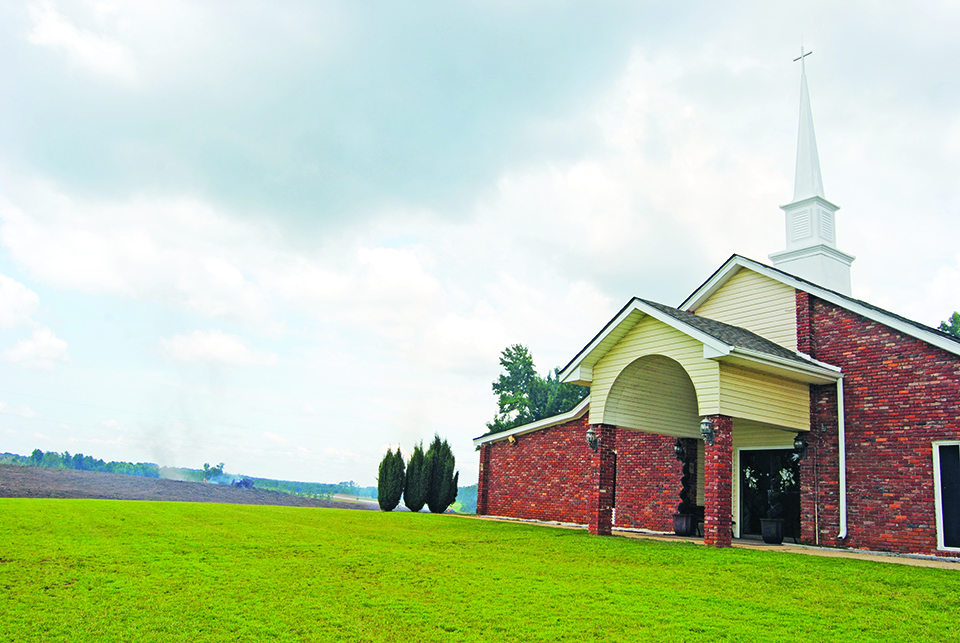 Submitted Photo | Times-News CLEAR CUT TO THE CHURCH: The Lanett Airport property is adjacent to property owned by the Faith Temple Church (above). Until recently there was a wooded area between the church and the airport site. All of that has been clear cut, and church members are not too happy about that, claiming that some of the land clearing took place on their property without their permission. The burned debris remaining smoking on Monday.

LANETT — A great deal of land clearing work has recently taken place at the Lanett Municipal Airport, which has been closed for some time for a longer runway to be installed. Asphalt will be going down in the new future on a 4,400-foot runway that will be taking the place of a landing surface that was about 3,300 feet long.

The upgraded airport will be an asset for the local community when it’s finished, but not everyone is happy with what’s been taking place.

In particular, the members of the Faith Temple Church aren’t pleased with the extent of land clearing that’s gone on next to their church. Rev. Joe Schuck told The Valley Times-News Monday afternoon that he and members of the church are of the belief that trees were cleared off church property without their permission.

The clearing extended from the city-owned property on the airport site to where the grass is cut on the church grounds. There’s now an unobstructed view from the church to the opposite end of the airport. Rev. Schuck said that the church owns land past the grass-cutting zone that included trees that have been cut down, piled up and are now being burned.

There are several debris piles smoldering right now on the airport side, one of them not far from the church parsonage.

Schuck said he was under the impression that trees would be left undisturbed on the church property as long as they weren’t higher than the church steeple. Trees taller than that could potentially cause problems for planes that were landing or taking off. As it turned out, everything was clear cut without informing church officials of what was to be done.

When the work was done, Schuck was in Florida visiting with a relative who was recovering from a heart attack. He was quite surprised with what had taken place once he returned.

The City of Lanett’s Planning and Development Director, Tony Chandler, told The Valley Times-News that the city was following an April 2016 agreement between the city and church. “We purchased an easement from them to take down the trees to ground level,” he said.

The Federal Aviation Administration (FAA) had recommended that for this to be done. In purchasing the easement, the city was getting the air space for planes to take off and land in the future.

The easement concluded a lawsuit that had been going on for several years. The church received a large sum of money in exchange for the easement.

Some of the wood piles that are burning on the site now are from the trees that were cut down on the church property. “We weren’t going to sell it,” Chandler said. “They had two years to sell it and chose not to.”

What passersby on the Interstate are now seeing is several hundred thousand dollars going up in smoke.

Chandler said this should have been no surprise to members of the church. “We notified them through their attorney when it would be taking place,” he said.