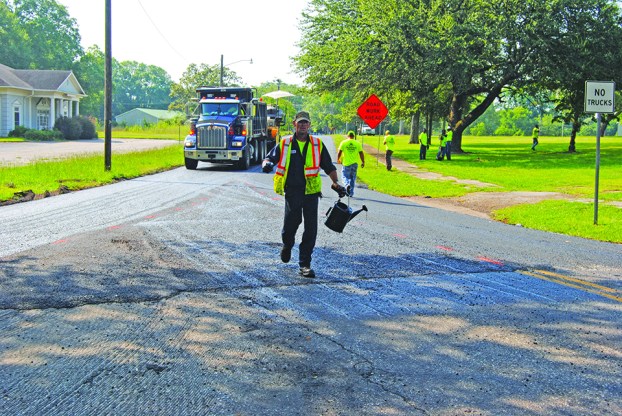 City of Valley paving near completion

VALLEY — An active year of road paving in the city of Valley was near completion on Friday.

Work crews were at the Trammell Block area of Fairfax, having made the four-mile trek from School Street in River View. There’s now a stretch of road with new surfacing between those two points.

The new paving for one continuous road is thought to be the longest project done in a single year.

“The portion of 20th Avenue that runs from the Langdale Methodist Church to School Street in River View is a pretty good distance,” said Mayor Leonard Riley. “We did that a couple of years ago, but I don’t think it’s four miles.”

2018 is a peak year for street resurfacing in Valley. When the work done at the boat ramps is included, the total cost will come to around $1.8 million.

Most of the paving work is finished, but there still needs to be some back filling on the sides of the road and the striping needs to go down.

Road paving was much needed on both River Road and California Road. Before the work took place this year, both were close to failing.

For the next several years, the city will be turning its attention to infrastructure needs linked to new industry coming to town. John Soules Foods will be locating a production plant in the former WestPoint Stevens distribution center off Towel Avenue.

Some sewer line and waste treatment plant upgrades will need to be taken care of before the plant goes into production in the fourth quarter of 2020. Within five years, the plant will be a major employer in the area with a work force of somewhere between 500 and 600 people.

A $750,000 grant has been approved to cover
the costs of this needed work.

Another priority for the next couple of years will be to take care of some needs in the new Valley Industrial Park.

“We need to build a road and to put in new water and sewer lines,” Mayor Riley said. “We have got to improve the water pressure. This may mean putting in a new water tank.”

The new road will be going in on the portion of the park that has visibility from the Interstate.

“For the next couple of years we will be working in the industrial park and on the John Soules Foods project,” the mayor said. “For the next two years or so, we won’t be doing the kind of road paving we did this year.”