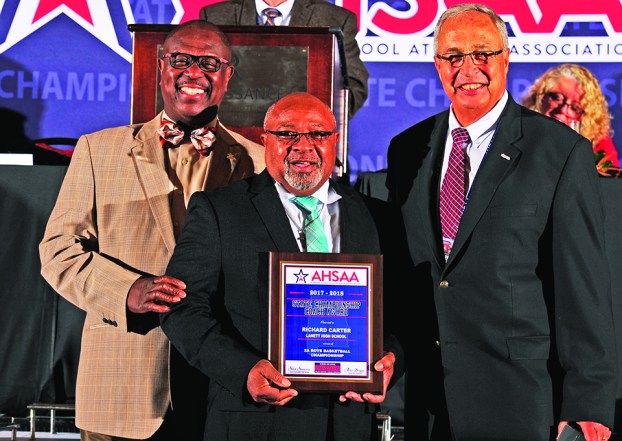 MONTGOMERY —The awards keep piling up for Richard Carter.

The head coach for the Lanett boys’ basketball team was named the NFHS Section 3 and state coach of the year during last Friday night’s 22nd annual Championship Coaches’ Awards Banquet at the Montgomery Renaissance Hotel and Convention Center.

“I thank Coach [Clifford] Story, who is our athletic director, for giving me the opportunity to do what I love to do,” Carter said. “The board, I thank them all for that.”

The banquet concluded the 2018 AHSAA Summer Conference, a week-long event that brought approximately 5,000 administrators, coaches and other support personnel from AHSAA schools to Montgomery to review the rules for this upcoming year, among other tasks. Governor Kay Ivey was the keynote speaker at the banquet where 112 coaches were recognized for winning AHSAA state championships.

Only four coaches were recognized for NFHS Section 3 awards at the banquet. Carter joined coaches from Homewood, Muscle Shoals and Opelika in the exclusive group. Section 3 covers the Southeast region of the country with the eight states of Louisiana, Mississippi, Tennessee, North Carolina, South Carolina, Georgia, Florida and Alabama.

“It feels really great,” Carter said. “We are just trying to remain humble because we feel like our work is not done yet. Humility is the key to any success, I’ve always felt.”

The Panthers won their third consecutive state championship this year. Carter coached for 45 years and took 13 teams to the final four before winning his first championship in 2016. Serving as a minister at Washington Chapel A.M.E. Church in Tuskegee, Carter points to his faith as the main factor in his humility.

“When you have a relationship with God and you know where you are with him, then it’s very easy to stay humble,” Carter said. “In general, that’s been my attitude throughout my life. To be humble. People often ask me, ‘coach, why is it that everywhere you go, you always have players?’ I say to them No. 1, it’s because of God. Also, God knows who can coach. Those who can coach, he doesn’t give them [good] players. Those who are not very good coaches, he gives them good players. I’m humbled by the fact, I know that nobody else [did that].”

Although uncertain on an absolute date, Carter said that his retirement from coaching is coming sooner than later, but he wants to win another state championship.

“You don’t hear the people at Duke say, ‘hey, we don’t want to win this year,’” Carter said. “Your desire is to do it every year … what counts is if you can walk off that floor in March with that Blue Map.”

LANETT — On Monday morning, Trikweze Bridges announced where he’s spending the next period of his career. The four-star senior... read more