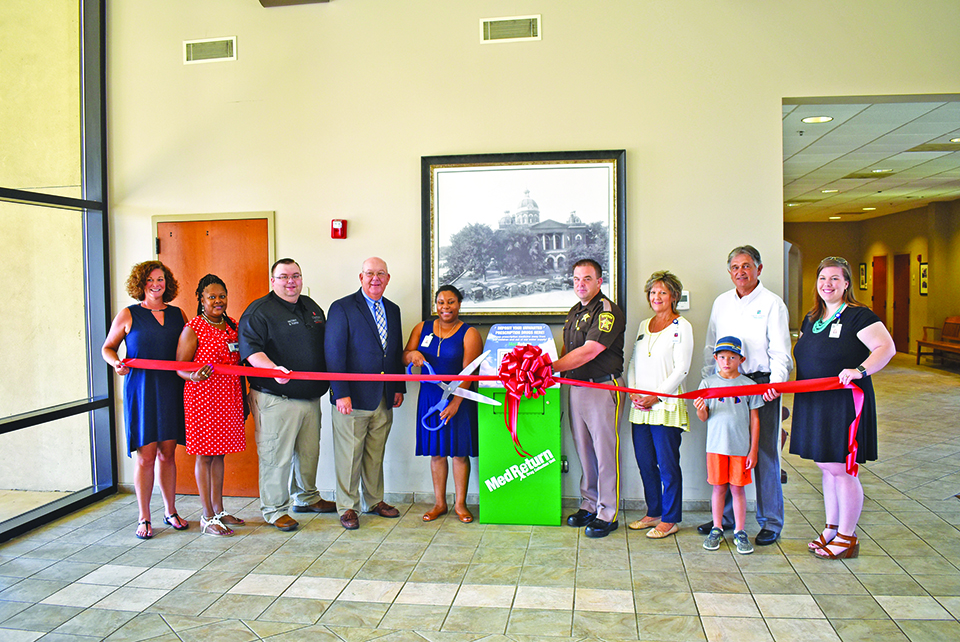 LaFAYETTE — Prominent members of Chambers County were gathered in the county courthouse lobby Thursday morning for the official opening and ribbon cutting of the new Prescription Drug Take Back Box.

In a partnership between East Alabama Mental Health and the Chambers County Sheriff’s Office, the box was developed to be a permanent location where people can dispose of drugs they don’t want, don’t need or that have expired.

“We have a big epidemic going on in Alabama, Georgia and other parts of the Southeast with prescription drugs and opioids,” said Chelsea Neighbors, Prevention Services Coordinator for EAMH. “Common practices of getting rid of them are throwing them in the garbage or flushing them down the toilet. This is a way to be environmentally friendly and keep drugs out of the hands of the wrong people.”

EAMH was able to set up a box here and form the partnership with the Sheriff’s Office after receiving grant money. After completing a needs assessment, LaFayette was chosen as the location for the box.

“This is something that will benefit all the citizens, not just in LaFayette but in this county and anyone who would use the box,” Moody said. “It’s something that we all feel will be very productive.”

Ashley Williams of EAMH did the ribbon cutting and spoke to the effectiveness she believes a resource like this will have on the area.

“We were very grateful to get funding from the grant to reduce prescription drug misuse,” she said. “We know this will be very beneficial to the county. Tell your friends and family now that we have this resource in the city and the county and just let everyone know so that we can do our part to make change in Chambers County.”