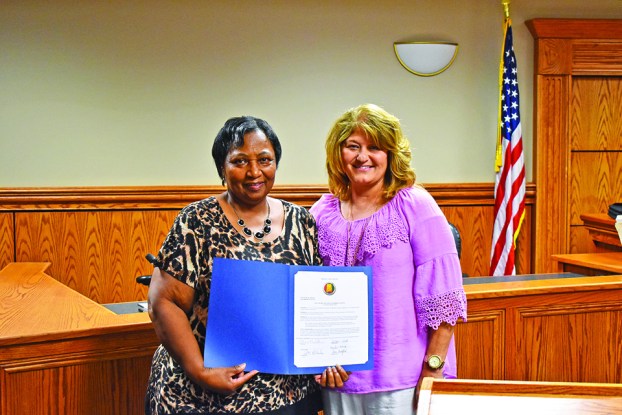 DAY OF PRAYER: From left, Diane Perry and Councilmember Debbie Wood hold the proclamation for 2018’s Day of Prayer. Since 2001, a day has been designated for members of Chambers County to get together and pray for their state, their country and their schools. School bags with necessary supplies will be passed out to children that attend.

LaFAYETTE — The Chambers County Commission began by their Monday meeting by proclaiming this year’s Day of Prayer.

Diane Perry, the event organizer, spoke to commissioners about the history of the event. This year marks the seventeenth anniversary, the first having been set on Sept. 6, 2001. Perry emphasized the importance, showing her concern with the state of the world and how she feels prayer can help it.

The Day of Prayer will take place on Aug. 3 at 6 p.m. CT on the east side of the county courthouse, but not on the courthouse property. School bags filled with necessary supplies will be handed out to children in attendance.

“I’ve been able to come up for several of the events where she is giving out these bags and loving on these children,” Commissioner Debbie Wood said. “There is praise right then and there. It’s a wonderful thing that [Perry does] for our babies.”

In other actions, the Commission designated Regina Chambers as Certified County Administrator/Manager.

“I am honored to read this resolution for our County Manager Regina Chambers,” Commissioner Samuel Bradford said. “We are proud of her and she’s earned this certification.”

Kimberly Carter of the Chambers County Development Authority spoke before the council in order for them to approve tax abatement requests from two businesses in the area, Norbord Alabama and AJIN USA.

Norbord Alabama opened officially on Nov. 8, 2017.The company’s originally invested $42 million to open business in Chambers County, and will now invest another $19.5 million at their Lanett facility.

According to Carter, this will be purely a machinery expansion that will allow them to diversify what they are currently doing.

“The goal for corporate for this Norbord facility is for this plant to become 55 percent diverse product, which is pretty exciting because they are trying to diversify what they do so that they aren’t depending on one industry,” she said.

AJIN USA has been in the area since 2008, putting a capital investment of $30.8 million for their facility in Cusseta.

The tax abatement requests from both companies were approved by the commission.

The commission also appropriated $125,000 for a community project.

Valerie Gray, Executive Director of the Chambers County Development Authority, had previously come before the Rules, Ways and Means Committee to request that amount go toward a new facility for the Chambers County Council for Neglected and Dependent Children and Youth, also known as Circle of Care.

Circle of Care is expanding their already-lofty number of community services, something the commission took note of.

“I was somewhat amazed by the things that Circle of Care did,” Chairman Charlie Williams said. “I was not aware. They perform great services in our county.”

LaFAYETTE — Even with another row of chairs added, the city council chamber was  standing room only Monday night as... read more