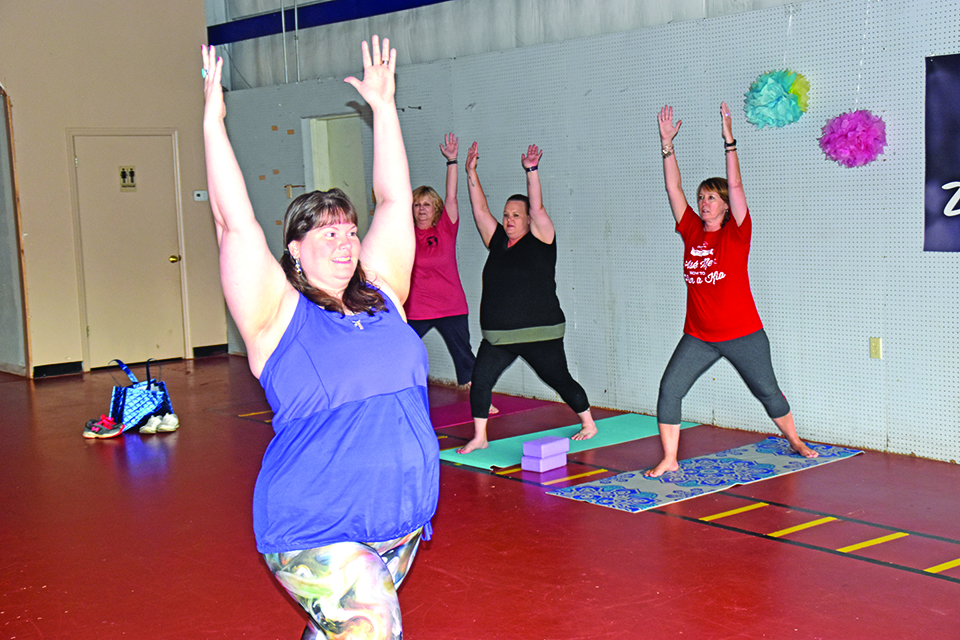 WEST POINT — Off of 2nd Ave in the West Point Parks and Recreation Department’s Activity Building, there are three women who are cooling down from an hour session of Yoga led by instructor Renee Burke. The women sit on the mats in mere silence, breathing in and out, with closed eyes as Burke tells the trio to remember the peace they had at the exact moment for the rest of the night.

“As you get older you can’t stretch and bend as much,” Cheryl Key, one of the participants, said. “You want somewhere where you feel comfortable and people won’t judge you as much. This is nice.”

The women were in the Curvy Yoga program, an activity that welcomes participants of all shapes, sizes and abilities.

Burke began doing yoga years ago through one of her gym memberships. The gym was sold and she went away from yoga for some time. After suffering autoimmune issues, she eventually found her way back, this time heavier and older, as she described. She found Curvy Yoga, the yoga that focuses on modifying poses instead of bodies.

“Over time I began to feel kinder to myself and realized this made me feel kinder toward others,” Burke said. “I also realized yoga helped me lessen the stresses of everyday life and I knew I wanted to share Curvy Yoga as on an average day our minds are overtaxed and our bodies underutilized.”

Now, every Monday at 5:30 p.m. she teaches a class to achieve the same amount she’s experienced through yoga.

“It’s me time,” Lisa LaFevor said. “The busy schedule and work, the stress of the day from work, yoga allows us to relax and stretch muscles. We sit at a desk all day so it helps us to strengthen and stretch those muscles that lay dormant during a day’s work.”

Local mother Teresa Sides attended her first Curvy Yoga on Monday evening and echoed LaFevor’s praises. She admitted that she probably wouldn’t have tried out any other form of yoga.

“I will become a regular,” Sides said. “I have four boys so I need a relaxation moment to myself.”

All of the women were thankful for the space that Curvy Yoga has offered not only because of age but because of their appearance as well.

“We don’t have to come here and think about if we’re a size 1 or if we’re a size 2,” Key said. “We know who we are and we’re comfortable and someone cares about us being relaxed and feeling good.”

“Through Curvy Yoga, I hope to honor, empower, motivate, and inspire, providing a safe, inclusive place where women can leave some of their stresses and worries at the door while learning to invite in a little more kindness toward their bodies, minds, and spirits,” she said.

For more information, Burke can be contacted at renee3196@gmail.com.