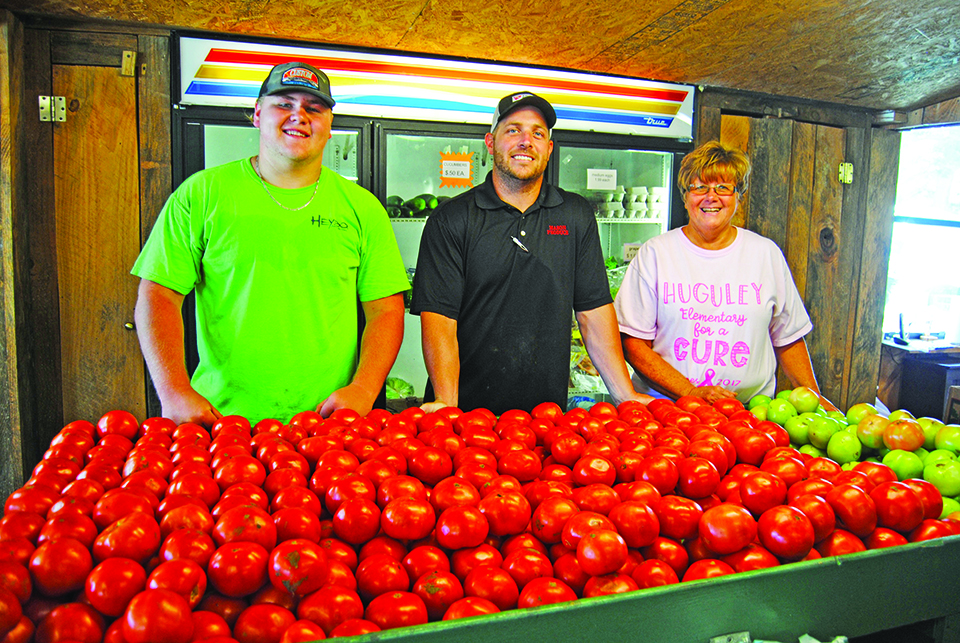 IT’S THAT TIME OF YEAR — When we’re on the verge of the Fourth of July, one can expect to see lots of tomatoes, watermelons and peaches at the local curb market. That’s the way it is right now at Mason’s Farmers’ Market, located near the Overhead Bridge in Lanett. “We do a good business here,” says Michael Landrum (at center). “We appreciate the support we are getting from the public." At left is Daniel Osborne and at right Kim Hill.

LANETT — Michael Landrum learned much about running a fruits and vegetables market when he worked behind the counter as a youth at the Village Curb Market, which was owned and operated by his grandparents, the late Evan and Jeanette Mason. Little did he know it at the time, but those experiences started him on a career path. He’s now running two businesses of his own in that same field, Mason’s Farmers’ Market and Bi-City Produce.

The Farmers’ Market is located on the south side of the Overhead Bridge, in the same location where Brown’s Produce once was.

Bi-City Produce is located in a warehouse off Cusseta Road in the Huguley Community, not far from Highway 50.

“We try to sell as much locally-grown fruits and vegetables as we can,” Landrum said. “This time of year we are selling lots of tomatoes, cantaloupes, watermelons and peaches at the Farmers’ Market. It’s not been a good year for those crops. We’ve gotten too much rain.”

Landrum spends much of his time traveling. He gets much of the produce he sells from markets in Forest Park, Ga. and Cordele, Ga. Bi-City Produce provides fresh fruits and vegetables for school systems in a nine-county area of Alabama and Georgia.

A passerby on Highway 29 can tell what time of year it is by what’s displayed outside Mason’s Farmers’ Market. In the spring and summer, there are hanging baskets outside the front door. In the fall, there are pumpkins and in November/December there are lots of Christmas trees.

Some of the biggest watermelons a shopper will see anywhere in the Valley are at Mason’s Farmers’ Market. Some of them are absolutely enormous. A popular variety is the black, seedless watermelon. One counter is filled with vine-ripe tomatoes, and another with red, gold and gala apples along with the ever-popular Granny Smiths. One area has grapefruit, navel oranges and nectarines. There’s some hot pepper and banana pepper grown in Lanett, jumbo onions and Sweet Vidalia onions from Georgia, potatoes, red potatoes, sweet potatoes, small lemons, large lemons, snap beans, lots of corn and some wonderful-smelling gumbo boiled peanuts.

“We’re doing a good business,” Landrum said. “It keeps me busy all the time. We go and get the fruits and vegetables we sell at different places in Georgia, Alabama and Florida. We appreciate the support we get from the local community. We’re here to get the items they go shopping for.”