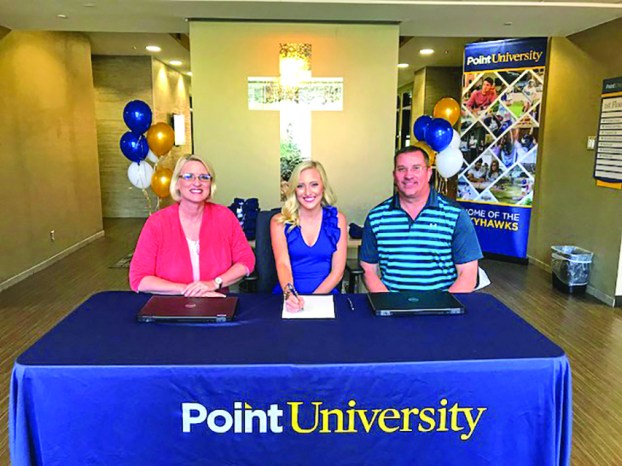 WEST POINT — Last fall, Abby Brumfield didn’t know if she was going to be able to cheer again.

“That first semester of college,” Brumfield said, “I know that some people struggle just because they want to come home but my experience was like anything that could possibly go wrong went wrong. So I was taking it in and was trying to be mature about the situation but being away from home the first time, it was hard.”

Brumfield made the decision to return home due to the injury and other personal reasons after the fall semester at JSU. She enrolled into Southern Union State Community College to pursue a nursing degree, through a program that would’ve went quicker and a career that would’ve made her more money than her original passion of being an Elementary teacher.

“I got into it and I was like, ‘this is not what I want to do at all,’” Brumfield said.

That same period is when Point University competitive cheerleading coach Lara Beth Griffin invited Brumfield to an Open Gym session. Brumfield accepted the invitation and this past week, it was announced that she signed to join the Skyhawks’ squad. Thanks to a combination of cheering and academics, Brumfield is heading into the academic year with a great deal of financial aid.

“Abby Brumfield is amazing,” Griffin said. “First of all, she’s super talented. She’s very well-known in the community and not only is she talented, she’s a really awesome person on the inside and that’s why I really wanted her at Point because she would represent Point really well. She’s kind of the epitome of what I would want a Point cheerleader to be and I want her to set that example for the other girls. I really think she’s going to change the program.”

Brumfield will be a flyer for the Skyhawks next season, a position that requires a great amount of core strength and trust for other teammates to make sure you come down safely. She joins a squad that placed fourth in the Southern States Athletics Conference Championships and seventh among 14 teams at the NAIA Southeast Regional in Baldwin City, Kansas in March.

“This is our second year in the competitive part of NAIA athletics, so we’re really just trying to get our name out there and hopefully that would help us recruiting,” Griffin said. “Each year, making those connections and bringing in these local girls, that really has helped with recruiting and the skill level of our program.”

VALLEY — For the Valley Sportsplex youth baseball league, this past season has been fruitful. The league is sending four... read more