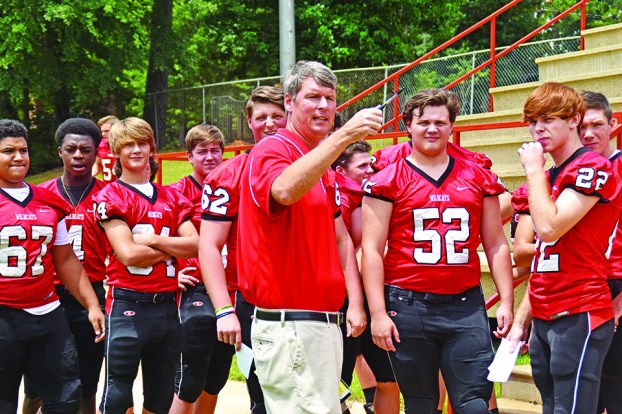 QUICK GUIDANCE: John Gartman became the new head football coach at Springwood School on July 19, which is just over a month of the team’s first game on Aug. 24. Photo by Rashad Milligan

John Gartman will now take over the reins after Headmaster Rick Johnson announced his hiring this past Monday afternoon. The two sides agreed to terms last Thursday.

Gartman has spent the last five years of his career as the defensive coordinator at Escambia Academy. During his time at the school, Escambia had a 48-15 overall record with two state titles and one state runner-up finish. He last served as a head coach at Pickens Academy from 2010 through 2013. At Pickens, he led the team to two playoff appearances, a state runner-up finish and he was also named the 1A State Coach of the Year, according to a press release.

“John has been referenced as having a ‘great football mind,’” Johnson said in the press release. “He is very passionate about the game of football. Coach Gartman is a promoter of team discipline and daily improvement as staples to his coaching values.”

Gartman has spent his entire career in the Alabama Independent School Association (AISA), even as a player in the 1990s with Jackson Academy and Wilcox Academy. He was the quarterback at Wilcox when the school won a state championship his senior year, according to the press release. Gartman then went on to play wide receiver at the University of Alabama, where current Clemson University head football coach Dabo Swinney was his position coach. Coming to the Greater Valley Area is different, however, for the coach.

“It’s a nice town,” Gartman said of Lanett. “It’s a little bit of an adjustment of being on Eastern time now, especially being so close to Central time. That’s taken some getting used to. As far as living in the town, I like it.”

On the field, Gartman said he plans to implement the Wing-T offense at Springwood, which is the same offense that rival-school Chambers Academy is currently running under head coach Jason Allen. The Springwood offense is led by sophomore running back O.J. Tolbert, who nearly rushed for 900 yards last season as a freshman, even after missing three games.

“The main thing we want to do is that we want to be systematic and disciplined in what we do and get better every week,” Gartman said. “I want us to play well. I want us to be better in week two than we were in week one. Better in week four than we were in week three and continuously improve, that’s the one thing that every football team can do and every football player can do is improve every single week. That’s what we’ll stress and hopefully at the end, the result will be pretty [good] too.”

Gartman filled the position that was vacated by Thomas Hill last month, who accepted a job at the AHSAA Valley High School 5A program to become the team’s new ninth-grade football coach. The Wildcats first game of the regular season is against Cornerstone Christian at home on Aug. 24.

MONTGOMERY —The awards keep piling up for Richard Carter. The head coach for the Lanett boys’ basketball team was named... read more