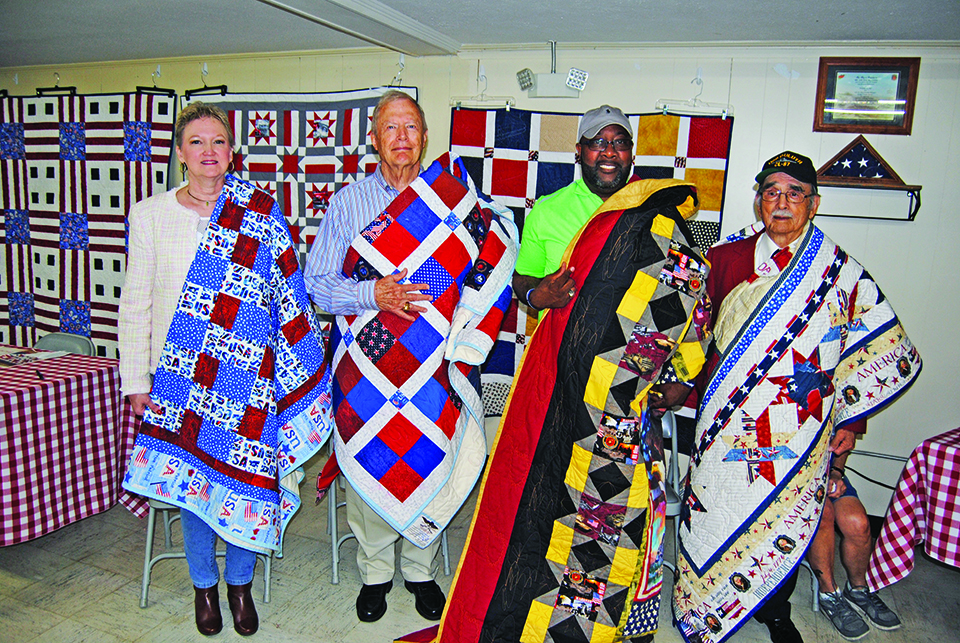 Receiving the quilts were two veterans of the Navy, one from the Army and one from the Marines. They are Richard Ledyard of West Point, who served as a second lieutenant in the Army during the Vietnam War; 91-year-old Marty Martinez of LaGrange, who served in the U.S. Navy during parts of three wars – WWII, Korea and Vietnam; Keith Todd of LaGrange, who was in the Marines from 1987-2002 and Gloria Gauthier (pronounced go-SHAY), who was in the Navy from 1982-1987.

The four-member group walked into the room to the recorded sounds of “The Caissons Go Rolling Along,” “Anchors Aweigh” and “The Marine Corps Hymn” recognizing the branches of the military they served under.

Mr. Martinez is originally from Three Rivers, Texas and currently lives in LaGrange. He’s in good health and has an excellent memory. He said that he would never forget being a young crewman aboard an aircraft carrier, the USS Hornet, as U.S. forces made a relentless drive from Iwo Jima, to Okinawa and finally Tokyo Bay.

“He’s the oldest honoree we’ve had so far,” said State Line chapter spokesperson Sheila Simpson. “We’re also having our first woman recipient today. We’re trying to get the word out about what we are doing. It’s a goal of the Quilts of Valor organization to honor as many veterans as we can.”

The first woman to be honored, Gloria Gauthier, said that she was proud to have served in the armed forces and would never forget going to sea from Norfolk, Virginia, aboard the USS Yellowstone.

“It was an amazing experience being on a ship out at sea,” she said.

Keith Todd was in the Middle East as part of the liberation of Kuwait in 1991. He was part of a support unit that found itself on the front lines when they had to pick up the slack left by some foreign troops that were misdirected in a chaotic situation brought about by a rapid advance.

“I had a very good experience in the military,” he said, “but I did see some bad stuff in Desert Storm. It was distressing when we were heading to battle and they told us our gas masks didn’t work. I was in the service for 15 years and am grateful for that.”

Richard Ledyard was a first lieutenant in the U.S. Army and was in Vietnam for one year.

“I handled communication for the 173rd Airborne,” he said, noting it was an important position, people had to act under pressure and be right on the information they passed along.

Ledyard was back home in West Point when he got an unexpected notice from the Army one day. He was contacted by the West Point Post Office that there was a package waiting for him at the post office. He couldn’t help but wonder if they were informing him that his enlistment wasn’t up and he had to report back to the Army.

He was dreading to find out what was up but instead found out what would be one of the high points of his life.

“They had mailed me a Bronze Star,” he said. “I wasn’t expecting it at all. One of my commanding officers thought I deserved it. I had a happy ending to my Vietnam experience, but many thousands did not.”

Quilts of Valor is a national foundation of people who make quilts to cover service members and veterans who have been touched by war. Quilt presentations provide comfort, honor and gratitude for the sacrifices being made by active-duty personnel and made in the past by veterans. The organization was founded in 2003 by Catherine Roberts, whose son
was serving in the Iraq War.

“These quilts bring a three-part message,” said Simpson. “First, we honor you for your service and for your willingness to leave all you hold dear and to stand in harm’s way in a time of crisis for all of us. Second, we know that freedom is never free. Quilts are made to say thank you for your many sacrifices. Finally, these quilts offer you comfort. Quilts have an ability to offer both comfort and warmth. We hope that when you experience dark memories or need the warmth of a hug, you will let this quilt wrap itself around you and provide both.”

The first Quilt of Valor was awarded at Walter Reed Hospital in Washington, D.C. as a means of showing that someone cared. It took Catherine Roberts and her quilting group three years to make 100 quilts to present to veterans. Since then, the organization has grown tremendously and many more local quilting groups have come aboard. In May 2014, Quilt No. 100,000 was presented at Walter Reed Hospital, the same site where the first quilt had been presented 11 years previously. That growing number is now about 190,000.

“Quilters say that every quilt tells a story,” Simpson said. “The story of your quilt began with a Georgia quilter who shares your love of country. As of today, the story of this quilt becomes your story. We hope you will look at your quilt as a tangible reminder that there are thousands of women and men across America who are forever in your debt and that it is our pleasure to honor you with a Quilt of Valor. Thank you, and most importantly, know that
you are forever in our hearts.”