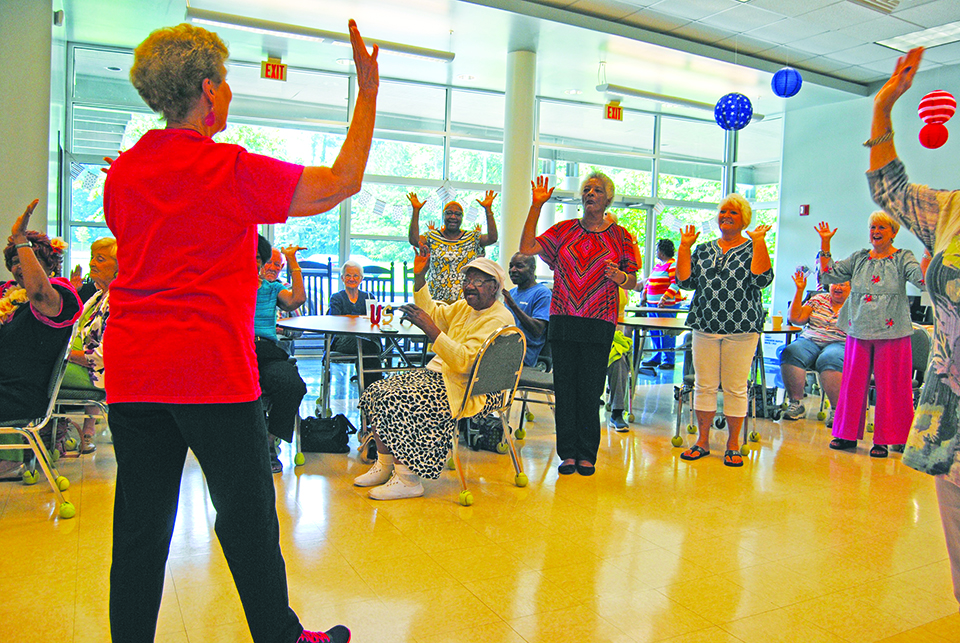 The Golden Divas from the Southwest Georgia Classic Club brought their showcase to the Active Life Center and had everyone smiling, laughing and singing along with them in a very entertaining program. Everyone in the Classic Club is at least 60 years of age and has taken part in senior pageants. “We want to get across to people that those of us who are aging can be active and have a lot of fun,” said long-time West Point resident Frances “Pal” Reeves, who introduced the program. “What’s so good about it is that most of us didn’t do this sort of thing before. We’re out of the box and having some good fellowship. We just want to keep going.”

Brenda Gilkey of Columbus, Georgia emceed the performance. She was Ms. Senior Southwest Georgia in 2011.

“You’ve in for a treat today,” she told the crowd. “We have a lot of different talents for you.”

The show began with Ruth Natoli of Albany, Georgia doing a baton routine to “Thank God I’m Old.” She twirled two batons in a fluid dance routine wearing a cape.

Next up was Linda Combs of West Point, who had everyone laughing through a yoga routine.

Everyone was standing, moving about and stretching. “Very good, very good, yeah!” she said to them, encouraging movement.

Kelly Pollack of Atlanta played guitar and sang the gospel classic “In the Garden.” Almost everyone in the room knew the words by heart and sang along with her.

Sylbrenna Thornton of LaGrange had a life-sized stuffed lamb she wheeled about as she sang “Mary Had a Little Lamb,” getting everyone to sing along with her.

One of the most impressive efforts of the day was by Rita Martin, who taught dance in Columbus for 50 years.

She walked to the front with the aid of a walker and when the Jan and Dean hit from the 1960s, “Little Old Lady From Pasadena,” started playing she stunned everyone with a nearly flawless tap dance routine.

She was followed by one of her former students, Carol Eason of Hamilton, Georgia who joked, “Yeah, but I was a toddler and she was a teen.”

Eason did a tap dance routine of her own. She moved and glided about with the dance steps even though she has had both knees replaced.

Nellie Barber of West Point led everyone in the hokey pokey.

She had everybody putting the left foot in and the right foot out and singing “That’s what it’s all about.”

The program concluded with Ann Carlisle wearing a lei and doing a hula routine to a Hawaiian song.

West Point is like a second home to the Divas. Most of them have been here many times, either performing at the Active Life Center or in the Senior Ms. Southwest Georgia Pageant, which has taken place on the stage of the New Horizon Theatre.