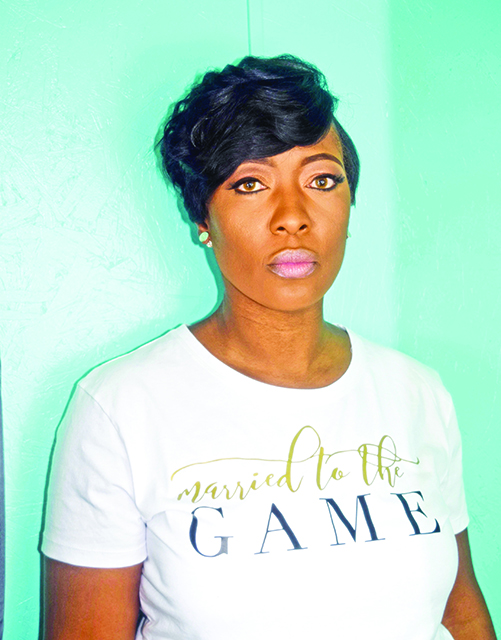 LANETT — Lanett High School head volleyball coach and Lanett junior high enrichment teacher Krisse Story is celebrating the release of her first book “Married to the Game” this Saturday. The celebration and book signing will be at 7 p.m. EDT at the Zee Palace Event Center.

The book details Story’s perspective and tips on having a lasting marriage. The inspiration for the book came to her while she was sitting in the stands during one of her husband’s first football games as the head coach at Lanett. Story, who is now known as the football team’s aquamom and is on the sideline every Friday night, was watching her brother, former NFL tight end Marcus Pollard, on the same coaching staff as her husband. The Panthers were losing and spectators began yelling that the staff didn’t know what they were doing.

The Panthers struggled in the first games under Clifford Story, Jr.’s helm and in the book, Krisse explains what those trying times taught her about marriage. The Story’s celebrate their 20-year anniversary tomorrow.

“Sometimes I look back and I honestly did not think that we would be married 20 years later,” Krisse Story said. “We had some difficult times. We had a lot of adjustments that we had to make, a lot of growing to do. I think that through that growth, it’s an exciting time for us because our children are growing up, we’re pretty settled. Looking back at where we started to where we are now, things aren’t perfect but things are good.”

The Lanett football aquamom has watched all three of her sons dawn the Panther uniform throughout the years. Tre, Kristian and Caden have all grown up in the program before her very eyes. Krisse noticed that during each school year, she would see the same moms at a lot of the sporting events, especially with Lanett having so many multi-sport athletes. She decided to begin the program, Mommy to the Game, where she would bring in coaches to explain the details of football and other sports to the parents who spent so many afternoons watching their children play.

Krisse and Clifford Story, Jr. have led the marriage ministry officially at O.H. Ministries under Bishop Bertha Hodge for the last five years. Before the couple was given the official title at the church, the Story’s have always given advice to other couples because of their passion to encourage others, Krisse said.

“Married to the Game” began being written a year and a half ago after the calling to write the book came to Krisse originally around six years ago. Story got in contact with the necessary publishers and editors to make the hardcover release possible this weekend.

“Coach and I tried, through this book and through our lives, to make sure that we’re transparent,” Krisse said. “To be right here at the end, ready to release the book, is an amazing feeling.”

The Zee Palace Event Center is located at 4116 28th Street Southwest in Lanett.

Reservations can be made online to attend the release party and book signing. Krisse said that she will announce more speaking engagements where the book will be available to purchase in the near future.