Legion discusses Day of the Veteran 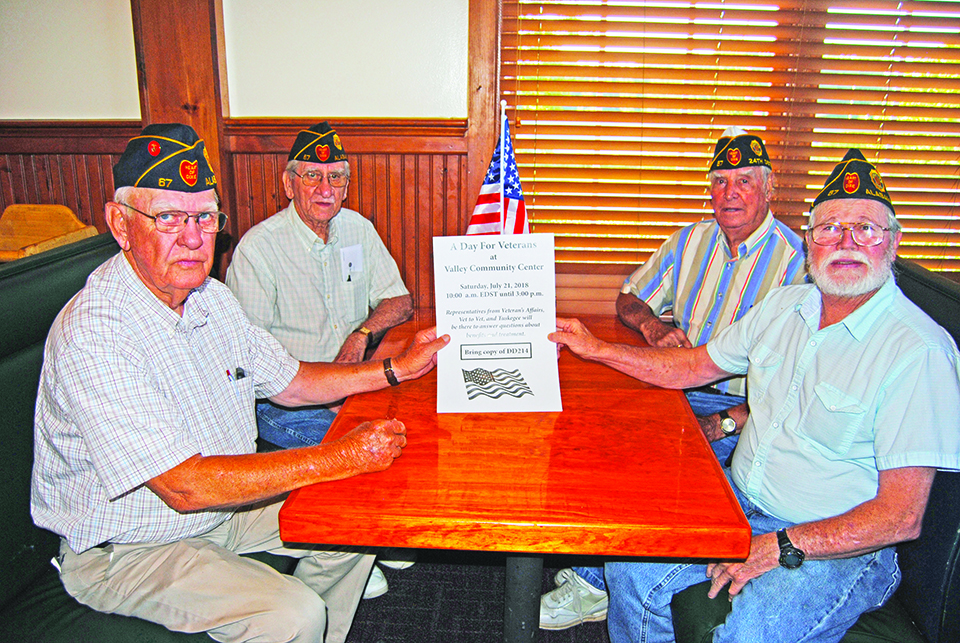 VALLEY — At its monthly meeting on Tuesday evening, American Legion Post No. 67 discussed final plans for this year’s Day for the Veteran. It will be held at the Valley Community Center from 10 a.m. till 3 p.m. EDT on Saturday, July 21.

“We’d really like to have a good turnout,” said Post Commander Lanny Bledsoe. “The purpose of this is to let veterans throughout the area know that there may be help for them they may not be aware of. People like Shawn Gaither of the VA office in Opelika will be there to answer any questions they might have. Sam Cofield of the local Vet-to-Vet group will be there as well. We want local veterans or their spouses to be there to talk to them and the other representatives we will have.”

On the day of the event, two tables will be set up inside the main entrance to the Community Center. They can register there and be given a number. When that number is called they can go to the Bobby Crowder Room and meet one-on-one with veterans advocates. There will be plenty of places for people to sit while waiting. There will be food and refreshments available while they wait.

There will be networking opportunities to speak to other veterans to exchange information about the problems they may have had or needed help they’ve gotten.

Members of the Legion plan on being at the Community Center at 9 a.m. to set up for the day ahead. Posters promoting the event have been placed at many locations in the Greater Valley Area.

“We’re just trying to get the word out about what we’re doing,” Bledsoe said. “If there’s one veteran out there we can help it’s worth doing this.”

Veterans coming out that day are encouraged to have copies of their DD-214 to show when they served in the armed forces.

Bledsoe commended Ajin USA for a program they are planning to honor veterans of the Korean War.

“To many people this is a forgotten war,” he said. “But many American soldiers and American families made tremendous sacrifices. We need to honor these veterans who are still living and honor the memory of those who have passed away.”

Bledsoe and Post Adjutant Bobby Elliott said they have gotten some good responses from the community on this year’s Memorial Day program, which was held indoors at Valley Community Center due to threatening weather.

“People have stopped me and told me how much they enjoyed it,” Bledsoe said.

Also in the meeting, to mark the 50th anniversary of the Tet Offensive, families of the local men who died in 1968 were recognized.

“The program turned out well,” Elliott said. “The families appreciated us doing that.”

Juanita Abney of the Ladies Auxiliary said that they were collecting personal care items such as soap, shaving cream and tooth brushes to take to a veterans’ home. She said members of the group would appreciate any donations they could get from the community.

The Legion Post will be hosting a very special Veterans Day program in November. This year marks the 100th anniversary of Armistice Day.