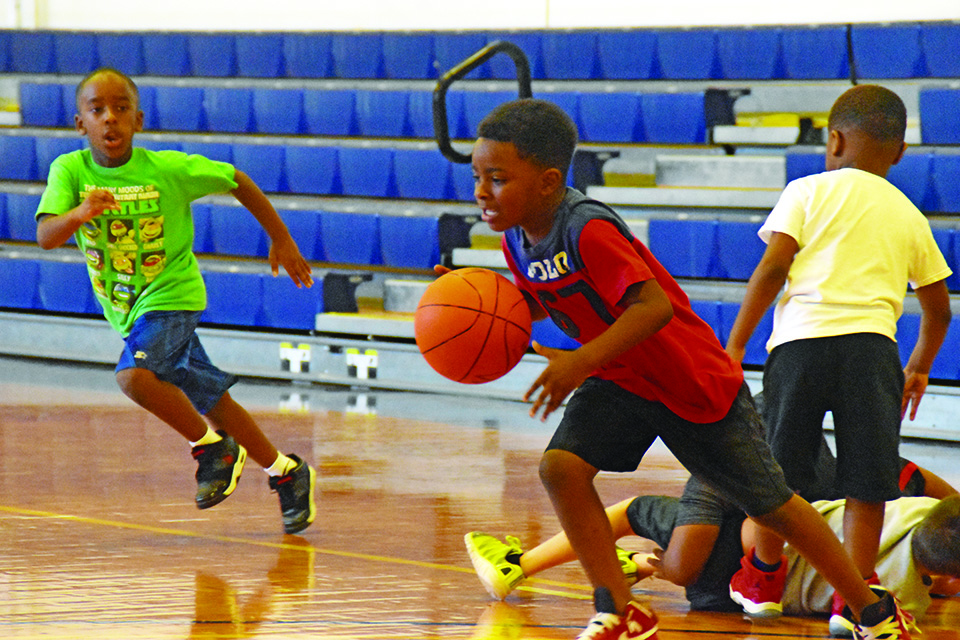 LET’S RUN: A camper runs up the floor during a scrimmage on Thursday’s session of the 2018 Troup High Youth Basketball Camp. Photo by Rashad Milligan

WEST POINT — A group of local kids spanning from the ages of four to 14 have spent their summer mornings on the Point University basketball court this week.

The court is the home for this year’s Youth Basketball Camp, which is hosted by the Troup County High Lady Tigers’ program. Current Troup County head coach Carla Thornton has worked with the camp for over eight years now. She said that seeing the passion on the kids’ faces is what keeps her coming back every summer.

“Seeing kids fall in love with the game of basketball,” Thornton said. “Seeing that they could possibly go somewhere with this. The teamwork and camaraderie that it builds, I just love seeing people have a good time and have fun.”

As opposed to sleeping in, watching T.V., browsing the internet or playing video games, the kids are sweating, running up and down the floor and cheering on one another.

“He just likes to get out and play,” one father said. “It’s nice. I’d much rather have that than him being inside all day long.”

Thornton organized challenges and different types of games for the campers. In one of the games, the campers had to run to half court to grab a ball off a cone, make a layup on one of the three baskets available before placing the ball back on the cone and tagging another teammate to go through the same sequence, until every member of the team was done. The losing team had to do two sit-ups.

The campers, who have been playing together since Monday, seemed to be very comfortable with one another.

“It makes me feel great because I’m all about teamwork and people working together,” Thornton said. “That’s why I like to do team-building activities. A lot of people get selfish sometimes in the game, especially watching the NBA. It’s good to see people working towards one goal.”

Thornton has always had a passion for the game that allowed her the opportunity to travel and earn an education at Bethune-Cookman University in Daytona Beach, Florida. The Callaway High School graduate began playing at the age of 9 in the West Point Recreational League. Now, she’s thankful for the ability to give back to the area that started it all.

“It means a lot,” Thornton said. “Especially when people support you, that support goes a long way and I try to support them as well so we all can work together.”