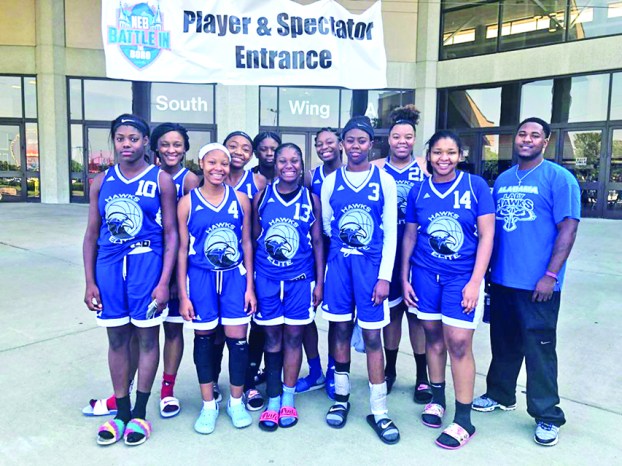 LANETT — The Alabama Hawks Elite travel basketball team went 1-4 at its last showcase in Louisville, Kentucky but winning wasn’t the No. 1 priority for the program.

“It’s about showcasing your talent,” Alabama Hawks coach Alvin Jackson said. “Being seen by those 500 college coaches there. Everybody was there, Duke, Connecticut, Auburn. They were just there with their player book, with everyone’s name in it, evaluating players.”

The Hawks were created by Jackson 13 years ago to give the Greater Valley Area its only travel basketball program at the time. After speaking to a coach from the legendary Atlanta Celtics travel basketball program, who have produced NBA players like Josh Smith, Dwight Howard and Randolph Morris, Jackson realized that the No. 1 goal for the program should be to give the players exposure.

“Just playing a tournament in LaGrange, Lanett or Columbus with no college scouts there, you’re just playing for a trophy,” Jackson said. “Who’s going to get seen?”

“There’s a lot of kids that never get seen because they’re from small towns like we have here,” Jackson said. “If you’ve got your grades right, and you’re in the right place at the right time, you never know when your opportunity might come.”

Members of the team are also being taught that success isn’t measured by the name of the school, Jackson said. The goal for each member of the Hawks is to have a better chance at receiving a free education than they had before.

“[Feliah] Greer needs to be seen farther than just Lanett, LaFayette and this area,” Jackson said. “With the talent Greer has and the mentality she has while playing a basketball game, you have teams and coaches where every move she makes, they’re writing stuff down. When they find out she’s only in the 10th grade, they kind of back off a little bit but her name is already well-known. I’ve seen Duke over there watching. I’ve seen Auburn sitting there watching. Alabama A&M, Pepperdine, all of these schools just sitting there watching the game.”

The team is now prepared to travel to New Orleans on July 22 to compete in the Battle of the Bayou, where over 400 college coaches are expected to attend.

VALLEY — The District Swim Meet is coming to the Valley Community Center this Friday and Saturday. The event is... read more