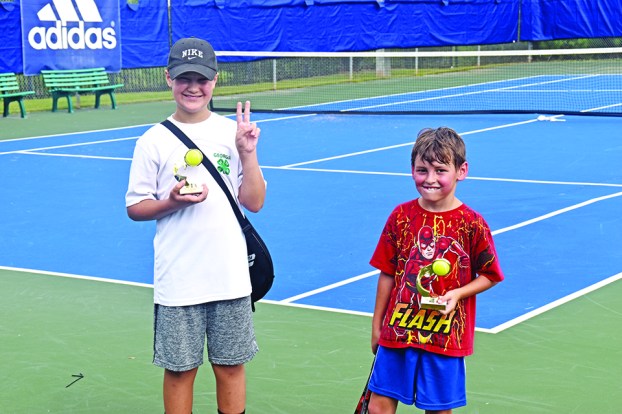 VALLEY — It was the first tennis tournament for many children at the Valley Sportsplex on Friday morning.

Bulloch was holding his 11 and under championship trophy that he earned earlier that morning after defeating Connor Nissin 8-6 in a match. Devin McGlon and Ashley Phillips both went 2-2 on the day before McGlon won in a tiebreaking head-to-head win.

A host of other tennis players under the age of 18 from the Greater Valley Area participated in The Jim Bob’s Chicken Fingers Valley Sportsplex Tennis Tournament as well. The tournament is another event hosted by Point University head tennis coach Chad Simpson in his effort to continue building the game of tennis in the community.

“I’ve learned that for our university to thrive, we need the community support,” Simpson said. “We’ve got to build connections and build relationships with the tennis community here and that’s been one of the goals of the summer.”

Heading into his fifth season with the Skyhawks, Simpson has also developed relationships with local high school talent like former Springwood School singles state champion Ananth Reddy throughout the years.

“He’s been the greatest coach of any sports team that I’ve ever been a part of,” 18-year-old Michael Pigg, who won the 18 and under championship on Friday with a 4-0 record,  said. “He expects hard work. He’s dedicated. He’s devoted to us. He cares for us not just as players but as people too and he’s top quality.”

The motivation for Simpson reaching out to the Greater Valley Area to teach the game of tennis goes beyond his love of the game, however. Like a majority of the other coaches hired at Point University, Simpson is deeply-rooted in his spiritual life and his purpose on earth expands beyond having a successful playing career himself.

“If I’ve done anything good in my life, it’s only God living in me that has made an impact on somebody’s life,” Simpson said. “If there’s any good that’s come from it, know that it’s not me, it’s the Lord.”

Simpson is hosting two more summer camp sessions at the Sportsplex before redirecting his attention to the Skyhawks.

WEST POINT — A group of local kids spanning from the ages of four to 14 have spent their summer... read more