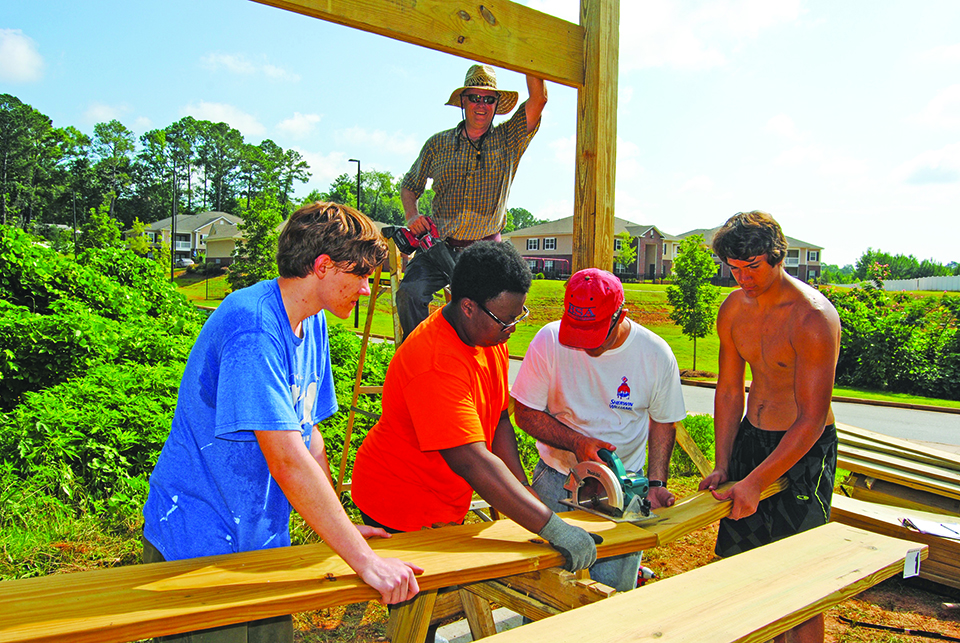 HOLD IT STEADY — While Joel Finlay cuts through a board with a power saw, Wesley Mattox and Jahwill Fannings (at left) and Royce White (right) hold it steady. Looking on from a ladder is Mayor Steve Tramell. The group was hard at work on a new school bus shelter for children who live in the neighborhood that includes the Forest Mill apartments,

WEST POINT —Booker Cooper saw something taking place on a street corner near his home and wanted the city to do something about it. Kids were gathering on the corner of Hatchett and Pear streets in West Point on a regular basis. There was nothing threatening or unsettling about it – they were children waiting for a school bus. What Cooper didn’t like was that they had to stand there in the rain on some days. Cooper had seen bus shelters at other locations about the city, why couldn’t one be built on this corner? After all, there would be anywhere from 10 to kids waiting on a bus at that street corner every day. It’s where kids whose families live in the Forest Mill Apartments are picked up by the bus.

Word of the request got to Mayor Steve Tramell and he wondered if the local Boy Scouts could help. After all, building school bus shelters had served as service projects in the recent past for Scouts working on their Eagle award. In 2012, the mayor’s son, Cam, headed up a shelter-building project on Martin Luther King Jr. Drive.

The mayor asked Joel Finlay, scoutmaster of Troop 9003, West Point, if anyone in his troop was looking at doing a service project and he told him that Troup High student Jahwill Fannings had risen up in the Scouting ranks to the point of doing that.

Finlay talked to Jahwill about the need for a bus shelter near the apartments, and the Eagle-Scout-to-be was enthusiastic about it.

Planning for the new structure began in earnest. The city offered a helping hand by pouring a concrete pad. Batson-Cook Hardware helped out in a big way by donating the lumber needed for the project. This past Saturday, Jahwill and a group of fellow Scouts gathered on the street corner to begin construction on the new bus shelter. Helping them were Jahwill’s dad, Bill Fannings, Scoutmaster Finlay and Mayor Tramell.

A great deal of work got done that first day. The project will be completed before the start of a new school year in August. Families who live in the apartment complex will be relieved to know that their children won’t have to stand in the rain while waiting for their school bus in the morning.

Mayor Tramell thanked Mr. Cooper for his role in getting this to take place.

“He’s a good man,” he said. “He worked for the West Point Housing Authority for 20 years.”

He also commended Jahwill Fannings for taking on this task as his Scout project.

Only around four percent of youth involved in Scouting earn the rank of Eagle. To qualify, the Boy Scout must have been a Life Scout for at least six months, must have earned at least 21 merit badges, must demonstrate the Scout Spirit, demonstrate leadership within his troop and must plan, develop and lead his service project.