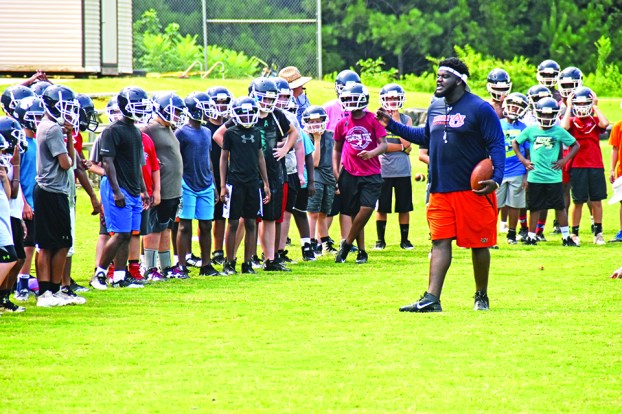 LIFE LESSONS: Former Auburn and NFL defensive linemen Maurice Swain tells the players of the Long Cane Middle School team that the lessons they will learn in football will be used in life. Photo by Rashad Milligan

Long Cane coaches teaching lessons that go beyond the field

LaGRANGE — Approximately 75 to 80 players were on the practice field at Long Cane Middle School on Tuesday morning, wrapping up practice in temperatures hovering around 90 degrees. The summer workouts attendance has consistently been at those numbers for the last two months.

Near the end of practice, the 12 coaches from the seventh and eighth-grade teams lectured the players on the importance of putting in more effort during every drill. One player was sent to do laps and another conditioning drills before the team was dismissed because of his attitude. The coaches demands aren’t only to win more games on the field but to teach much greater lessons in life.

“What I’m telling them now is going to stick with them for life,” defensive coordinator Maurice Swain said. “If you really pay attention to it, football is going to teach you stuff that you need to know your whole life. When you go through hard things, how to fight through those things. When you go through tough times, how to lean on your brothers when it’s hard. This is stuff that I didn’t have when I went to school here.”

After Swain went to Long Cane Middle School and Troup County High School, he played for Auburn University as a defensive lineman before training with the Detroit Lions and Kansas City Chiefs in 2017.

“I’m just trying to teach them the things that I’ve learned that made me better and eventually got me to the NFL,” Swain said. “I know I don’t play there now, but I made it there by taking the little steps and paying attention to the little steps because when you don’t, you slip. When you slip up, you might not be able to un-ring that bell once you ring it.”

Pike is entering his third season as the head coach at Long Cane. The team has played for the league championship in his first two seasons at the helm, winning in 2016 and losing last season to W.F. Burns Middle School. The team struggled going up against a great running back, Swain said.

“I’ve learned from that, [now I’m] bringing adversity every single day to them,” he said. “When we get in those moments in ball games and life, they’ll be able to overcome it and not let adversity defeat them.”

Long Cane plays its first game of the regular season at Smiths Station on Aug. 30.

WEST POINT — Off of 2nd Ave in the West Point Parks and Recreation Department’s Activity Building, there are three... read more