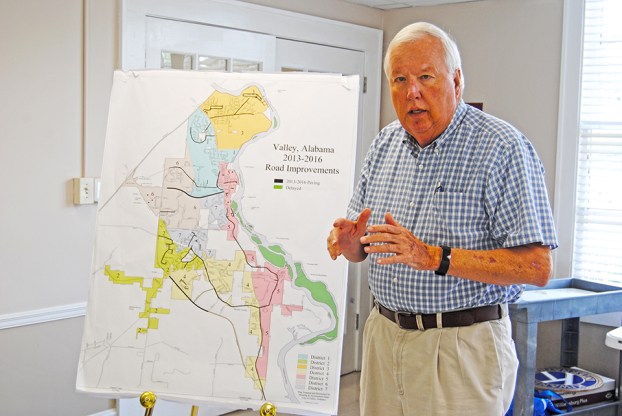 VALLEY — On Wednesday, Valley Mayor Leonard Riley told members of the Kiwanis Club of Valley that he did not expect to be buying land for the city when he ran for office back in 2012.

“If you told me back then that we’d be buying land in five years I would have told you that you were crazy,” he said.

Over the past few years, the city has been able to purchase some substantial property on its west side. The total amount of those purchases is around 1,100 acres, all within easy access of I-85 at Exit 77. Given the opportunities to purchase this land, one can now argue that city officials would have been crazy to turn it down.

“As the owner, we can annex this property into the city and can control how it develops,” Riley said.

The land has been acquired in three separate purchases. The first was a 400-acre site behind the Lanier-Carter mills site. The land includes Valley Industrial Drive and the Lakeview Cabin. It was purchased several years ago from former WestPoint Home entities.

The second purchase, the 358-acre Combs property, adjoins this land on the south side near the former WestPoint Stevens transportation center and Fairfax Bypass. The latest acquisition is the 315-acre Burney property, located across Fob James Drive from Zaxby’s. This property extends across 55th Street and fronts I-85.

Riley talked about how some of the land is under development. A 30-acre parcel of land off Industrial Drive has been sold to Scannell Properties and is the site for a future distribution center for WestRock. The city sold the site for $12,500 an acre.

“WestRock is a very good company for our community,” Riley said. “It started off with 20 employees in 1996 and is now running at 100 percent capacity with 432 employees.”

The paper cartons that are made at the WestRock plant in Huguley will be stored in the distribution center until shipped to market.

On Monday of this week, the city sold a 10.3-acre site on the east side of Lanier-Carter to Four Star Freightliner for $400,000. The company intends to build a truck sales, service and repair business on the site. The city plans to build a cul-de-sac type access road to the site and to provide needed utilities. The new center will have visibility from the Interstate and could be open in August 2019.

“Our frontage property is in demand,” Riley said. “We have been No. 2 on four different projects. There’s a lot of interest in locating here, and that’s why we need a new water tank.”

That new tank could be going in on a point of high elevation on the Combs property, not far from the transportation center.

“We are trying to generate income for the city,” Riley said, noting that Four Star Freightliner could generate an estimated $70,000 a year in revenue and the WestRock distribution center around $55,000 a year in lease income.

There was no expectation of future commercial or industrial development behind another recent land purchase. The city purchased the Fairfax Mill site for $125,000.

“We want to clean it up and have green space there,” Riley said. “Unless we can get a Brownfields grant it’s going to be a slow process.”

Hiring a contractor to clean it up would cost the city $500,000 or more in a year’s time. The city has been clearing the industrial site property with some equipment it owns. This will be continuing, and similar work could continue at the Fairfax Mill site. One problem at Fairfax is that there’s a clear well on the site that’s full of debris. That will have to be cleaned up.

The mayor said he was pleased with the way the Bethlehem Church Cemetery project has proceeded. A pergola has been built there, some sunken graves repaired and a wrought iron gate put in. The Donald Williams estate left $508,000 for Valley Senior Center and $125,000 for improvements at the cemetery.

“We still have a little more work to do there,” the mayor said.

Approximately 20 unmarked graves in the cemetery will be marked. There will also be a marked grave for David Dunlap, a pioneer Chambers County settler whose grave site was recently exhumed in Shawmut.

Riley said that he felt good about a contract between the city and the East Alabama Water, Sewer and Fire Protection District to transfer Valley EMS to East Alabama. Valley is one of very few cities to run an EMS service but not a fire department. The mayor said the city has probably lost $10 million doing this since the city’s founding in 1980.

“This was not a quick decision,” he said. “We put a lot of thought into this. We want citizens to understand that we will still have EMS service in Valley. It’s just going to be in a different building.”

One big advantage East Alabama has involves overtime. Firefighters have to work 52 hours a week before getting overtime. The city had to pay overtime for everything over 40 hours.

“We will still have local control,” Riley said. “I’m confident East Alabama will do a good job with it.”