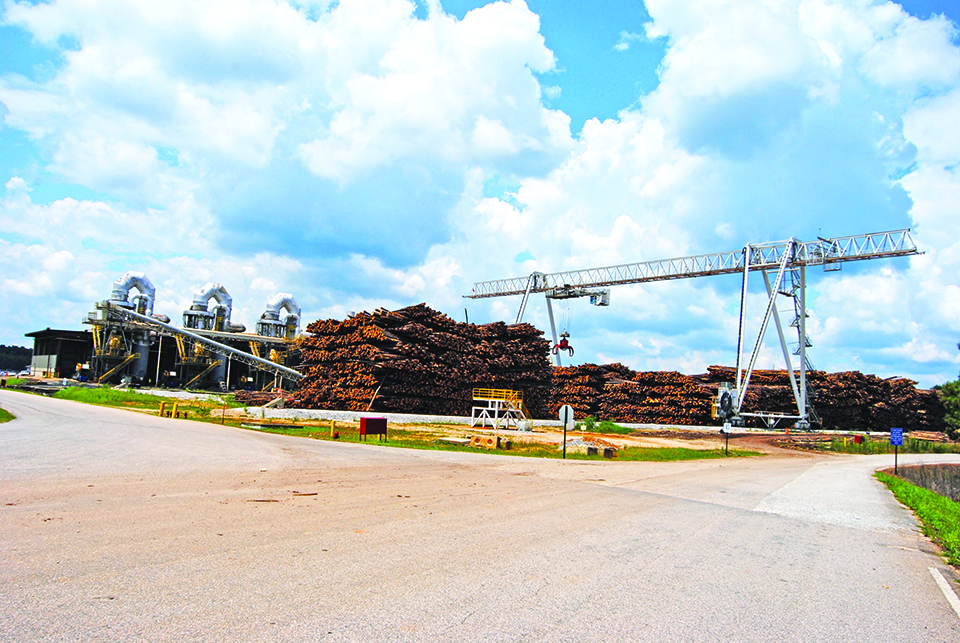 VALLEY — In addition to being a very good employer for Chambers County, the Norbord Barton Mill in Huguley is a major player in the production of oriented strand board, better known as OSB. The plant runs 24 hours a day, seven days a week and is on the cusp of producing four million board feet for each of its 12-hour shifts.

Jon Anderson, the local plant’s human resources director, was the guest speaker at Monday’s meeting of the Valley Lions Club and talked about the local plant and Norbord’s impact in the global wood products industry. Headquartered in Toronto, Canada, Norbord is the world’s largest producer of OSB. The company has 17 mills in the U.S. and Canada and three in Europe.

Anderson posed a question for members of the club: “Why are we in Alabama?”

There’s a simple answer – the abundance of Southern yellow pine. Of course, there’s also a good climate, a good workforce to recruit from, low taxes and regulations, and a good quality of life.

“Pine trees grow fast here, and there’s an abundant supply,” Anderson said. “We need sustainable forests, and we have that here.”

Barton Mill has 143 full-time employees and 16 temporary workers on its staff. With a $7 million annual payroll and $5 million in benefits, it’s a good company to work for in the east-central Alabama region. The plant’s three largest customers are Menard’s, Home Depot and Ashley Furniture.

Those who complain about their utility bill should consider what Barton Mill pays every month, some $300,000.

According to Anderson, the cost of energy and supplies is fourth on the list of expenses. The No. 1 cost is wood, No. 2 is resin and wax, and No. 3 labor and benefits. The plant uses 20,000 truckloads of logs in a year. That’s equivalent to one continuous line of loaded log trucks from the local plant stretching all the way to Chattanooga, Tennessee. That’s enough wood to build 40,000 new homes in a year.

Over 70 percent of the wood going to Barton Mill is provided by private landowners.

“We need a sustainable, affordable wood supply,” Anderson said, adding that the wood products industry is attempting to make that happen. For the most part, landowners are working with them. The end result is that forest land is much better managed that it was 40 years ago.

The cribs outside Barton Mill are stacked high with an enormous supply of pine trees ready for processing. An average person looking at it thinks that this huge amount of wood should be enough to last for the rest of the year, but according to Anderson is only a two-week supply.

No doubt about it, there’s a lot of pine going into that mill and going out into the U.S. as OSB. And they can manufacture it in all sizes and all kinds of thicknesses. Some sheets are eight feet wide and 24 feet long. Less than an inch thick and weighing 480 pounds, they’re made for the modular homes industry.

“We make furniture-grade products,” Anderson said, explaining that OSB is going out into the world as countertops. There’s a veneer applied to the surface that makes it look like the expensive kind.

“Most of our timber comes from a radius of 80 miles around the plant,” Anderson added.

Anderson is originally from northern Minnesota and has extensive experience with Norbord’s first U.S. plant, which opened in Minnesota in 1981. He has a home in Fredonia and has fallen in love with this part of the country. The winters are much milder in the deep south than in the frozen northland.

“Norbord wants to have a presence in the local community,” he said. “It’s where our employees live, and we want to benefit the area.”