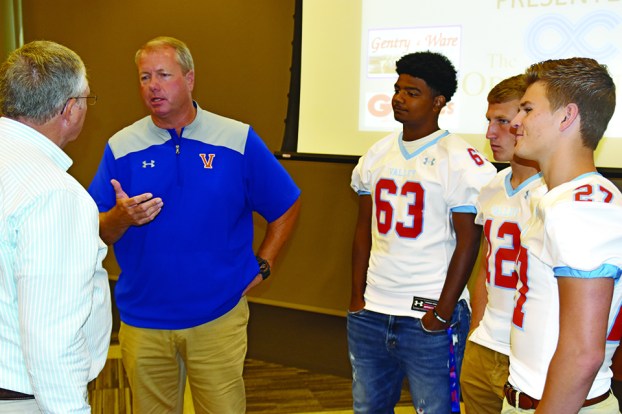 MEET THE PRESS: Valley head football coach Buster Daniel talks to a local photojournalist after the Rams’ press conference on Thursday. The seniors who represented the team, from left, are Deyante Bennett, Steven Coker and Deniel Etherton. Photo by Rashad Milligan.

This marked the first time the event was hosted by the local radio station, which was on Southern Union State Community College’s campus in Opelika.

“This is extremely exciting [to be in] this kind of venue for high school football,” Valley head football coach Buster Daniel said. “This is a really unique thing for this area, we’ve never had anything like this. It gives us a chance to talk about our program, our kids and get them out there so everybody knows what’s going on.”

The media days were conducted similarly to traditional ones on other levels. Representatives from 16 eastern Alabama schools were present at the event, conducting 20-minute press conferences before breaking off into individual or group interviews with local media members.

Reporters from various print, radio, online and broadcast outlets had microphones and cameras focused on the student-athletes in the brand new Southern Room on campus. The experience was a different one for a few of the players.

“I did one interview in Coach Daniels’ office where someone came and talked [to me],” Valley senior wide receiver and defensive back Steven Coker said. “I went in there but that was it. It was just me, him and a little phone, not four cameras.”

Even coaches had to adjust to the new set up.

Second-year Beulah head football coach Cody Flournoy had an interesting encounter during the Bobcats’ session on Wednesday morning when his team’s press conference was after Lee-Scott Academy. The Warriors are led by 42-year coaching veteran Robert Maddox. Flournoy, as opposed to Maddox, admitted that he didn’t have an opening statement prepared for the crowd of reporters.

“I liked it,” Flournoy said, before laughing about going after Maddox. “I said, ‘thanks. Y’all set me up putting me behind that guy.’ I was really glad that they had it because I think we play a lot of good football out here in East Alabama.”

One of the teams present at the event was Lanett High School, the reigning AHSAA 2A state champions. Junior quarterback Kristian Story, head football coach Clifford Story, Jr. and seniors Trikweze Bridges and Tifton “Dee” Dobbs were the Panthers’ representatives.

Kristian Story talked about how the team is expecting to get everyone’s best shot this season and how the team is adjusting to life after Anquaevious Pollard, Baraskious “Boo Rock” Dowdell and Terrion Truitt. He said the offense should still be fine because the aforementioned players’ backups are good athletes as well. A reporter later asked how much it meant to him to win a state championship under his father coaching him.

“I was there the season he went 1-9,” Kristian Story said. “There were times where no one was in the stands except our family and the band … I saw how hard he worked, so to be a part of it, it felt very special.”

Dobbs discussed the team’s camaraderie and about how much winning continues to inspire the team after collecting three state championships in basketball.

Dobbs also shared his close bond with the receiving corps and offensive coordinator Chip Seagle during the conference.

All eyes were on Bridges when he stepped to the podium only a couple of days after making national news by committing to the University of Oregon. He said that while he liked the SEC, he chose the school that he felt the best at and also pointed out that it’s about how hard a player works and not just where an athlete plays. One reporter brought a smile to Bridges’ face by asking how the community has reacted to his decision. He was on his phone at his grandmother’s house he looked up at the TV screen.

“I didn’t expect for it to be on the news,” Bridges said.

The media days were one of the last events of the offseason with only five weeks remaining until the opening week of the regular season.

SOUTHAVEN, MISS. — The champions of the 2018 Dizzy Dean World Series hail from the Greater Valley Area. The West... read more