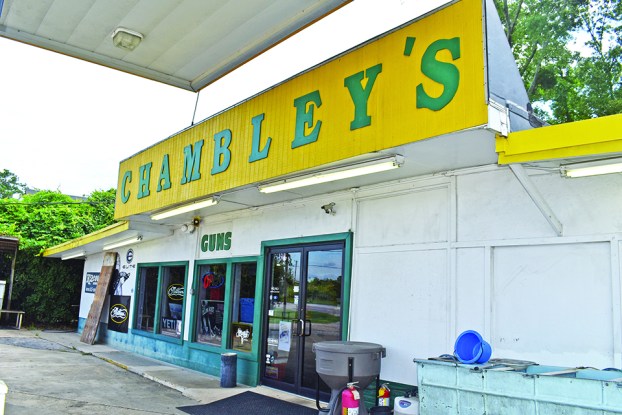 Chambley’s Quality Outdoor Products, a Valley staple since 1983, was broken into Sunday just before midnight. The burglars, two masked men who have yet to be identified by Valley police, made off with several weapons including handguns and crossbows.

“Two masked individuals disabled an outside camera, smashed the window, went in, smashed a display case, took numerous firearms and crossbows and left,” said Valley Police Assistant Police Chief Maj. Mike Reynolds said. “Our officers and detectives are still trying to identify suspects and are keeping an eye out for any weapons.”

Owner George Chambley, visibly upset with the situation, is also trying to find out who burglarized his store.

The burglars disabled an outside surveillance camera, hiding any evidence of the vehicle or vehicles they used to transport the stolen firearms, but two more inside were able to capture them in the act. They smashed through a glass window on the front of the store to use as an entryway which has since been replaced.

Chambley is still in the process of assessing how much the stolen items added up to financially and said he will be improving security to prevent any future theft.

“[We will] add more cameras, add more fence, more deterrents,” he said. “Anything we can to keep them out, we will do. We will enhance our security greatly.”

Chambley added that while the stolen property is an issue for business, getting burglarized in the first place takes a more personal toll.

“Oh yeah I’m upset,” Chambley said. “Getting broken in to, getting robbed, it really irritates you. You just really want to beat the crap out of them.”

Chambley urges anyone who might have information to reach out to him or the Valley Police Department.

“Any information will be held in confidence and there could be a reward if it leads to an arrest,” he said.

The Valley Police Department is requesting anyone who may have any information regarding this incident or who may have been in the area during this time and noticed any suspicious person or vehicle to call the Valley Police at 334-756-5200 or your local “Crime Stoppers” at 706-812-1000.