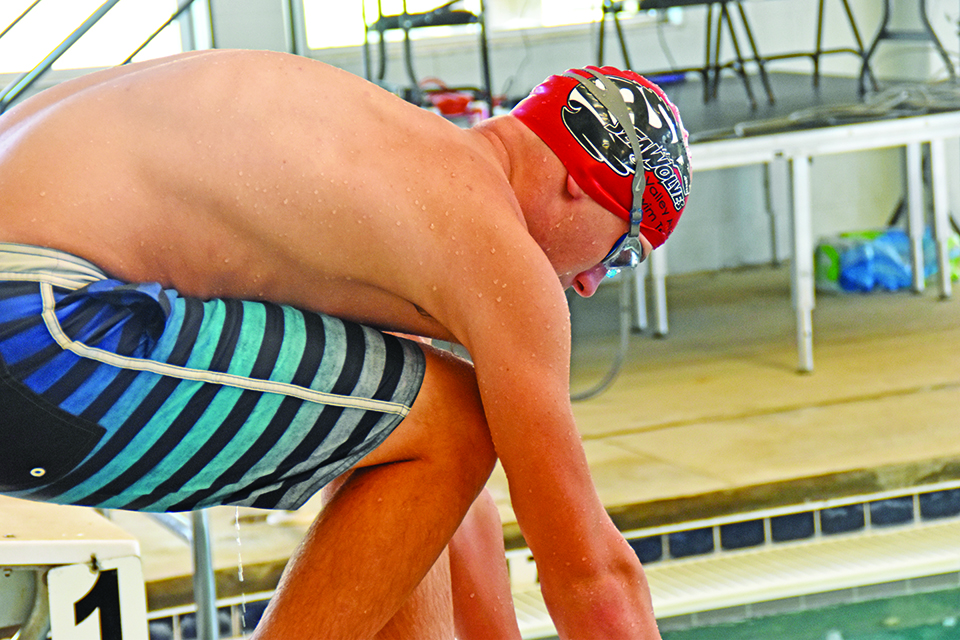 ON YOUR MARK: Valley Lifeguard A.J. Bailey prepares to dive in the third lane at the Community Center. Photo by Rashad Milligan

VALLEY — The District Swim Meet is coming to the Valley Community Center this Friday and Saturday. The event is expected to draw at least 800-1,000 people to the area.

“I think it’s definitely going to benefit the community,” Aquatics Director Carly Howell said. “Not just [to] show off our facilities but help the city as well.”

There will be approximately 400 swimmers spanning from ages 6 and under-18 at the Valley pool over the weekend. Some of the top teams expected to swim at the meet are Auburn and Prattville.

“I’m really excited,” Howell said. “I think we’re prepared. We hosted two other swim meets this season to make sure we had everything ready and everyone prepared.”

The Valley aquatics program hosts an event every season but this weekend determines the swimmers who make it to the state swim meet. Howell expects Valley to send off 10 to 12 swimmers out of the 15 who are participating this weekend. The team is led by Eli Rudd, who is the team’s top-ranked swimmer.

“He’s definitely shown some improvement throughout the year with different techniques,” Howell said. “He tries really hard in practice.”

The overall goal for the Valley team is to continue to improve and have fun ending this first season under Howell. The former Campbell University swimmer’s vision for the team is to expand as a USA program. Establishing USA program status will allow teammates from LaGrange and West Point to participate in meets and also allow the team to swim year-round. Valley would also be allowed to host more events in the fall and winter as a result of the change. The constant competition is expected to keep kids in the program and attract new swimmers as well.

Howell is optimistic about the future with the current youthful team she’s coaching and expects to get more time to develop them while growing up.

“I think as we get older, it’s easier to bring in new kids rather than older kids,” Howell said. “I think once we grow a little and age, we’ll be able to expand by getting new, younger swimmers.”

Growing the program isn’t a concern to Howell due to the size of the Greater Valley Area and the quality of the Community Center’s facilities, she said.

Spectators of the meet are welcomed to park at the Community Center or any of the parking spaces at the SportsPlex.