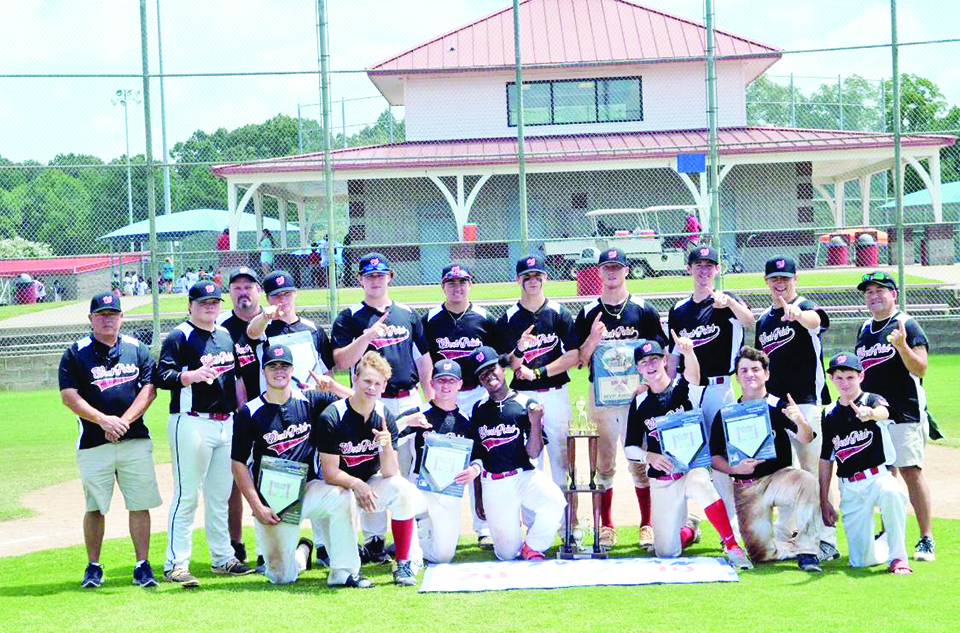 WE ARE THE CHAMPIONS: The West Point 18 and under All-Star baseball team celebrates winning the 2018 Dizzy Dean World Series in Mississippi last weekend. Submitted

SOUTHAVEN, MISS. — The champions of the 2018 Dizzy Dean World Series hail from the Greater Valley Area.

The West Point 18 and under All-Star team swept South Vinemont out of Huntsville in three games to claim the title this past Sunday. The team, representing the state of Georgia in the tournament, outscored South Vinemont 28-6 in the best-out-of-five series.

“It feels great to bring home a World Series Title to this area,” head coach Rodney “Coach G” Greathouse said. “In nearly 15 years of coaching, this is by far the most talented group I’ve had the privilege of leading.”

West Point won the first game over the Alabama team 12-2. Pitcher Brantly Robinson had five strikeouts in five innings. Seth Adams closed the game in the sixth inning, allowing no runs. The game ended due to the run rule. Chandler Lott was West Point’s catcher for the day.

In the second match, West Point’s Cam Gosdin threw seven strikeouts in five innings. Jackson Knox closed out the game on the mound for the Georgia representatives in the final two innings, giving up zero runs in the effort. Colton Greathouse was the catcher in the 9-1 win.

The final game was the most competitive, Coach Greathouse said. Both pitchers were hitting 85-88 miles per hour on the hill in the battle. Lott earned the victory on the mound for West Point, going the distance in seven full innings and throwing 11 strikeouts. West Point clinched the series with a 7-3 victory.

The team is composed of student-athletes from Callaway, Troup County and Valley among other schools. Thomas Anderson, Anthony Robinson of Robinson Home Inspections and Rodney Greathouse of First Realty of LaGrange make up the team’s coaching staff.

West Point Parks and Recreation Director Mike Pitts said he was very proud and impressed by the team and the coaches for coming together to complete a championship season with West Point.

The 18 and under team joined the 16 and under softball All-Star team at West Point out of groups who have recently traveled out of state to play in tournaments against other teams in the regions. The softball team fell short of its opportunity to represent the Southeast in the senior league softball world series by getting eliminated early on in the bracket.