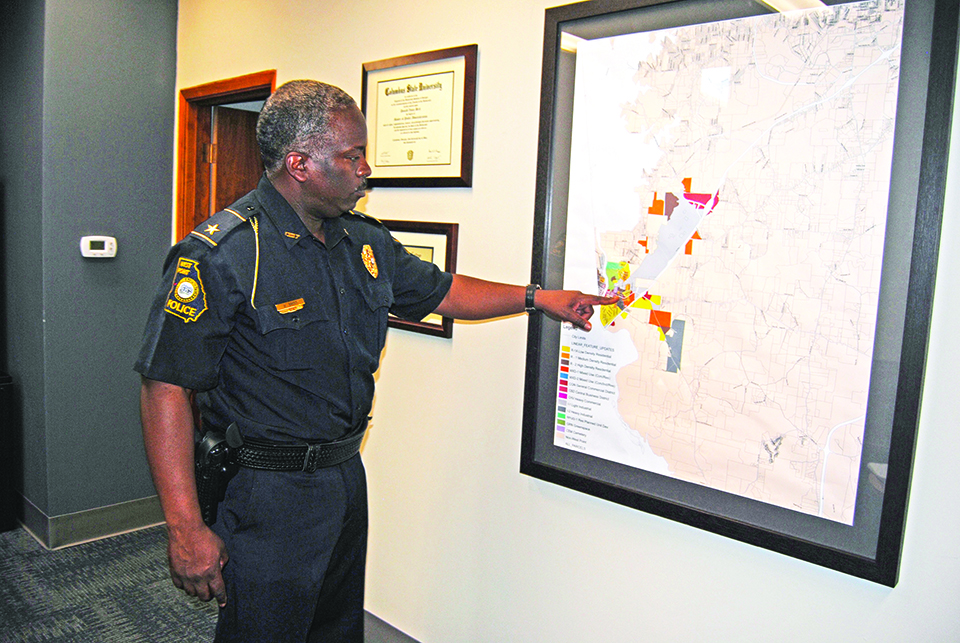 A BIG AREA TO POLICE — THe above map on the wall inb Chief Donald Britt’s office shows the area the West Point Department covers. It includes Kia Motors Manufacturing Georgia on the north and the Northwest Harris County Business Park on the south.

“It’s been good,” he told The Valley Times-News. “I’ve been enjoying meeting the people and getting to know them.”

A 27-year veteran in law enforcement, Britt is still living in Griffin and commuting to West Point each day. He plans to relocate to the area with his family in the near future.

“I love being in a town the size of West Point,” he said. “It’s smaller, and you get to know people better. It’s an ideal place for community policing. We want people to know that we are here to help them.”

This Saturday will mark one month that Britt has been chief of the West Point department.

Britt said that he wants townspeople to known he really appreciates the reception he’s gotten. He’s made a point to get to known school officials like West Point Elementary School Principal Jan Franks and to let them know that WPPD wants to have a positive presence throughout the community and especially with school children.

“Kids are our future. We need to help them,” Britt said.

He said that retired educator Zelma Brock is one of the most delightful people he’s met. “She’s a take-charge kind of person who connected me to people at the school,” he said.

Britt added that West Point has some first-rate officers with the only problem being there aren’t enough of them. West Point has around a dozen officers. Given the physical size of the town, the presence of major industry, a four-year university in the downtown area and a very busy downtown district, not to mention a population of around 3,500 people, West Point needs more than a dozen officers, according to Britt.

“We’d like to have 24 or 25 officers,” he said. “The Troup County Sheriff’s Office has been helping us for the interim, and we appreciate that, but we need more officers in the department.”

At the present time, West Point has four cadets at the police academy in Columbus. That will help long term. They will have to graduate to be certified and then will have to go through eight weeks of training with a fellow WPPD officer.

It’s quicker to hire officers who are already certified. They are in demand, though, and usually go to bigger departments where the pay is better.

“We will keep working till we get the certified officers we need,” the chief said.

“West Point is a really nice town,” Britt said. “There are some really good people here. We have some good officers in our department, and we will be hiring some more good ones to keep this city moving forward.”