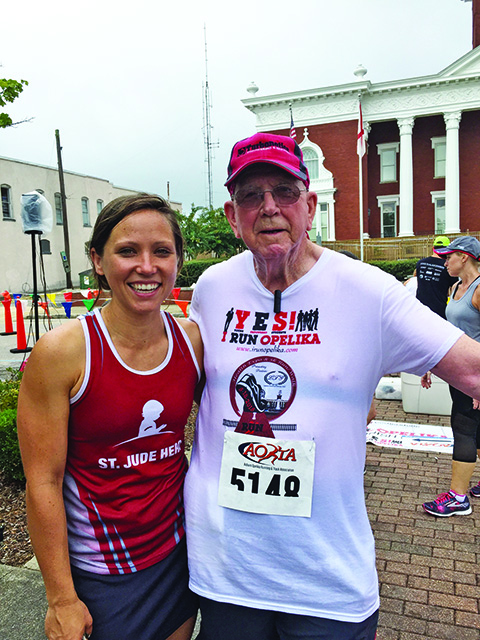 LANETT —It’s never too late to get better.

After rehabbing with a new heart stent, 79-year-old Lamar DuBose was challenged by one of his nurses, Vickie Crenshaw, to run a marathon.

Crenshaw then explained to DuBose that he basically has a new heart and he just needs to train it.

Beginning rehab after receiving his new stent this past spring, DuBose said that he had a new amount of energy that he needed to use. He began walking at an average rate of over three miles per hour, then four miles an hour when another nurse pointed out to him how much faster he was going than the average person in his condition.

After rehab, DuBose and his wife began a strict diet where minimal salt and no sweets were allowed in his house.

On May 15, DuBose’s walks have become runs and the need for daily medications vanished. He keeps track of his sugar and heart level through an app so that when the levels get to an alarming rate, he knows to slow down and begin walking again.

DuBose’s time for running 5ks was around 50 minutes when he began. Now, he runs 5ks in 40 minutes. He runs every Tuesday, Thursday and Saturday.

“That helped me more than anything I’ve ever done in my life,” DuBose said of yoga. “What it does is it stretches you out. It makes you limber up so what I’ve done is take it on Tuesdays and Thursdays after I run that three miles. It has done more for my muscle and for my ligaments than anything that I can even imagine.”

DuBose felt so good after a summer of exercising, that he told Crenshaw that he planned on running in the I Run Opelika 5k and Health Expo on Aug. 18. Crenshaw responded with excitement in her voice and told DuBose that she would run with him.

“She did, she came all the way down from Lanett to Opelika to run with me,” DuBose said. “Isn’t that something? I mean she’s amazing.”

Springwood School cross country junior Chalyb Lenker finished the 5k first overall before running back and encouraging the rest of the groups to finish strong, according to Dubose.

“He is magnificent,” DuBose said of Lenker. “He put on a clinic of how it should be done. Not only did he go down and get one group, he went back down that hill and got some more. He did it until every one of those kids came through and gotten their time.”

DuBose, the only runner over the age of 70, finished at 41 minutes, a slower time than his average nowadays because of the various hills he encountered during the run. He is still running this week after last weekend’s 5k and he doesn’t on stopping anytime soon.