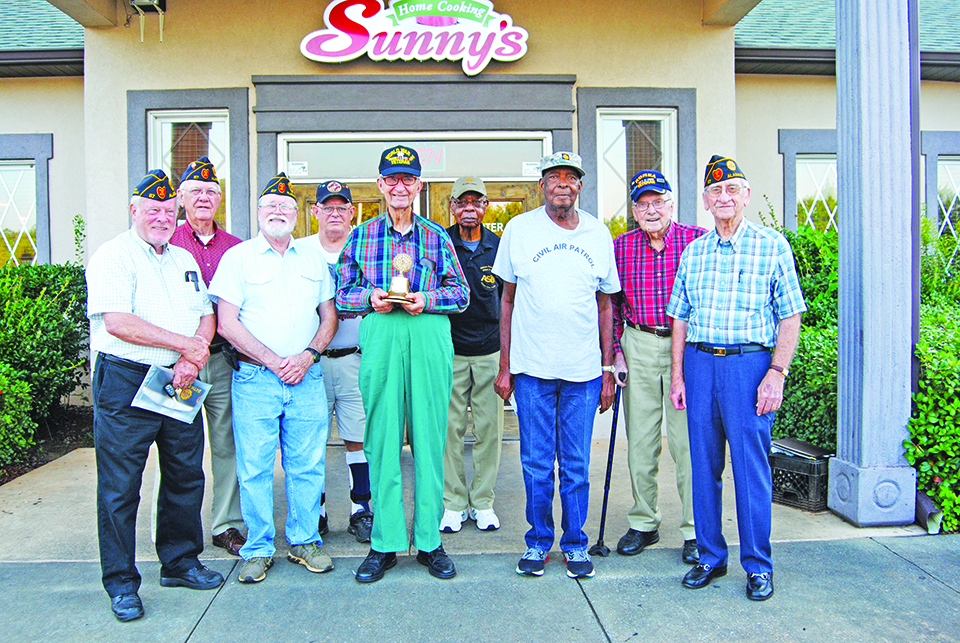 VALLEY — A solid brass bell that was awarded to American Legion Post 67 on Jan. 1, 1953, and somehow got lost over the years, has made it back home.

Post Adjutant Bobby Elliott had it on display for a most surprised group of Legion members Tuesday evening at Sunny’s Restaurant.

Elliott told the group that he learned of the bell’s existence in a recent phone call he received from a young man from Richland, Georgia named Austin Eades.

Austin’s dad is a current member of the American Legion post in Richland, and his great-grandfather f0unded the post. Austin’s dad somehow came upon the bell and noticed the inscription on it that said it had been presented to American Legion Post 67 in Lanett, Alabama on Jan. 1, 1953, for having the highest percentage of American Legion membership for the size of the town.

At some point, the bell was auctioned off and wound up with the Richland Post. The elder Mr. Eades thought it might be a good idea to get in touch with the Lanett post to see if there was any interest in getting it back.

Post 67 relocated to Valley some years ago and has remained active up until the present time. Austin followed up on his dad’s request and tracked down information on Post 67. He found out that Bobby Elliott of Valley, Alabama was the current adjutant.

“He called me from the (U.S. 280) flea market in Lee County this past Saturday and told me he needed to know how to get to Lanett to give me the bell,” Elliott said. “He asked if he could meet me somewhere. I told him to head north along Backwater Road and to keep going till he came to a red light. I told him I would meet him at Givorns’ on the left across from the red light.”

Elliott had no idea what he had, but his curiosity was greatly aroused.

“I knew it was heavy when he got it out of his truck,” Elliott said. “When he showed it to me up close, I was amazed. I could read on it that it had been presented to Post 67 on Jan. 1, 1953, for its high rate of participation.”

Elliott said that he had been most impressed that a father and son from Richland, Georgia. had been so conscientious in doing what they did to get the brass bell back to Post 67.

Elliott passed around a card of thanks for each member to sign. They’ll send it to Austin and his dad.

“He was so nice,” Elliott said. “We need to send him something to show our appreciation. He really didn’t have to do that, but it means a lot to us that he did.”

Elliott said the hardest part was keeping it secret for Tuesday’s monthly meeting.

“I wanted it to be a surprise,” he said.

Given everyone’s reaction, he succeeded.

There was a definite   wow factor in the room when he unveiled the brass bell and read the inscription,

The Post is now on the same level as the local Kiwanis, Lions and Rotary Club – it has a brass bell they can ding to start and end meetings.