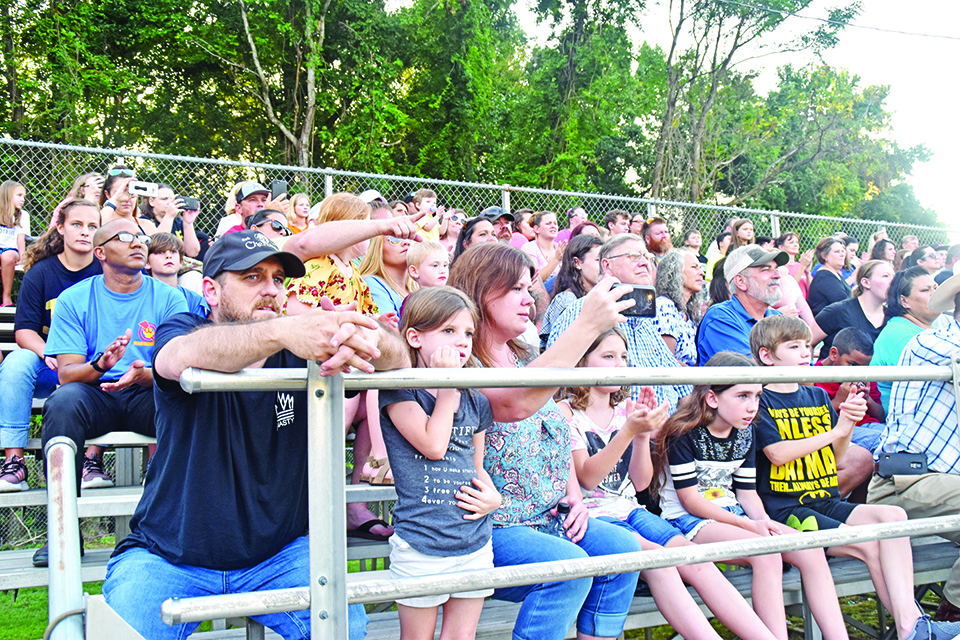 BEULAH — Fans and family alike packed the home side of the stands at Beulah’s football field last Thursday night to get the team ready for the regular season.

“I’ve been to every pep rally since I was in seventh grade,” Beulah junior Gracen Davis said. “I like to come to watch all my friends have fun, show school spirit and watch the teachers get pied in the face, too.”

The night featured performances from the marching band and cheerleaders from both the junior high and varsity teams.

The senior band members were recognized before performing a stand-still version of this season’s halftime show.

The other fall teams, the junior high and varsity volleyball squads, were also recognized before the football team was introduced by classification.

The main event for the attendees, however, was seeing the Beulah High School’s faculty and staff members participate in games. Principal Cincrystal Poythress helped lead her team to victory in a game where the staff spun in a circle 10 times before running to a cheerleader on the field and back to the sideline.

“I didn’t know she had speed like that,” Beulah senior quarterback Lonzie Portis said. “She spun 10 times and was still running, it’s crazy. She’s fast.”

Poythress was excited to be on the winning end as well.

“It was pretty funny,” Poythress said. “Coming out of it, I was feeling pretty dizzy, but we pulled it off for the win though. It was pretty exciting;  it was fun.”

The football team danced during the event, headlined by junior lineman Trevor Mapp doing the “floss” dance in the open field. Portis and other players performed the “shoot” dance while the band played and shared laughs throughout the night.

“Being around each other, that’s what happens,” Beulah head football coach Cody Flournoy said. “They start growing closer together. Of course, these guys have been together for a long time and you can really see a lot of chemistry there. We went through fall camp. These guys have been sweating together, fighting together through the ups and downs. We break it down on family and that’s the type of atmosphere we have here.”

Portis missed the month of July with the team to attend an academic camp in Massachusetts, but he said he feels 80-to-90 percent comfortable with the new plays that were implemented when he was away.

Beulah opens its season at Loachapoka this Friday at 7 p.m. CT.