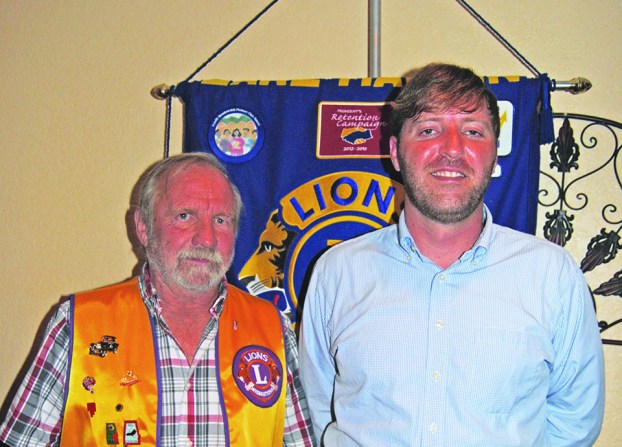 VALLEY — Chris Busby told members of the Valley Lions Club on Monday that the recruitment of retail businesses is something that produces highs and lows.

He cited the recruitment of Four Star Freightliner to the area as an example. It didn’t happen overnight.

“This project lasted six years,” he said. “When I started (with the CCDA) three-and-a-half years ago, Kimberly Fuller handed me a folder with Four Star Freightliner on it. They wanted a site a half-mile from the Interstate. At first, they wanted a vacant building. We looked at many of them but couldn’t find anything suitable. It went on and on and on and hit a stalemate.”

A breakthrough took place when the city started purchasing property near the Interstate. Four Star representatives, Busby said, we’re very excited about it.

“They loved the site near the Lanier-Carter mills,” he said, “and we started talking about price. We told them that other companies were interested in the site and that it was now or never.”

Busby said that Mayor Leonard Riley was instrumental in closing the deal.

Four Star has agreed to purchase the site for $400,000. There’s still some due diligence in the purchase. They could back out if the soil is not suitable.

Four Star is a truck sales, repair and maintenance business. They presently have stores in Tallahassee, Fla. and Valdosta, Ga. A big plus for them in coming to Chambers County is that there is a big logging industry here.

“Loggers would love to have them here,” Busby said. “The only repair place now is in Montgomery. They have to go a long way to get it done.”

Four Star already has a service truck in this area to help truckers.

Four Star coming here could have an impact on the Chambers County Career Technical Center. Diesel mechanics are well paid, and Four Star will be needing them.

“They want to be here,” Busby said of Four Star. “They will help a lot of our industries. It’s an exciting project, but I’m not considering it a done deal until we have a ribbon cutting.”

Four Star representatives believe their business would look really good when seen from I-85 at the Valley site.

“They will be servicing a lot of vehicles there,” Busby said.

Four Star is an ideal example of the kind of business the CCDA wants to bring here. It’s a company with trained personnel and good-pang jobs.

Busby said that he works with Chambers County’s cities and towns in recruiting new business. The big advantage for Valley, Lanett and Cusseta is proximity to the Interstate. Five Points is another story. Local residents might be happy with a farmers’ market or a new convenience store. Busby said that Waverly has been doing a great job of maintaining the historic feel of having US 280 going right through the middle of town. A restaurant known as the Waverly Local attracts people from a wide area. It was formerly known as the Yellowhammer.

The key factors in attracting new restaurants, said Busby, are traffic counts and income. Buffalo Wild Wings is not likely to come to Chambers County. They want a local population of 100,000 people, a cinemaplex with ten screens, seven-days-a-week liquor sales and a traffic count of 30,000 vehicles.

Publix wants a household income of $50,000 a year, and Chambers County is a little bit short of that. Olive Garden and Longhorn Steak House want daily traffic counts of 30,000 vehicles and a local population of 100,000 people.

“You and I know that a Chick-fil-A would do well anywhere,” he said. “They would make money on an island in the Arctic Ocean.”

Busby said that a big-name restaurant was considering locating in Chambers County several years ago. They crunched some numbers on a restaurant they had in Tiger Town in Opelika and found that close to 40 percent of their business was from people who lived in Chambers County.

“They decided not to come,” he said. “They didn’t want to cannibalize a restaurant they already had.”

Busby said that technology is making data gathering is more sophisticated. There’s a new app, for example, that tells how many people are driving in your community.

Valley, for example, has a population of 9,000 people but because of I-85 there are 20,000 people there every day and much of that Interstate traffic stops there.

Busby said he was very disappointed with the failure of Steak & Shake on Fob James Drive and that it was hard to understand.

“Zaxby’s is a fantastic business and Church’s does well,” he said. “The restaurants along Highway 29 are doing well.”

For anyone looking at this area to locate a new business, they not going to look at how well Zaxby’s, Church’s, Milano’s or Sunny’s are doing.

“They will ask you what happened to Steak & Shake,” Busby said. “They see a big, new building sitting there empty. We need to have something else there. This will be a big obstacle to overcome. We are working very hard on this, and we expect something else to go there.”

Busby said there’s not much vacant space on Highway 29 near the Interstate, but that there’s interest in locating there. That’s something people should be watching in the coming months.

The former Resurrect Antiques site off Fob James Drive has a lot of potential for future development.

Busby commended the city leaders in Lanett and LaFayette for attempting to make their downtown areas more attractive. This could help spur new businesses locating there.

The proximity of Point University could help with the redevelopment of downtown Lanett, Busby said.

“Overall, I feel like we are in good shape retail wise,” Busby said. “Valley and Lanett have good sales tax numbers. LaFayette does, too.”

“We talk a lot in the office of what we can do to get people to come here,” he added. “On one side we have LaGrange and on the other Opelika-Auburn. What we have is the chicken or the egg question. What comes first people or retail?”

Busby said he likes to tell the story about the time CCDA Director Valerie Gray was on a tour of the Knauf plant in the Huguley Industrial Park. She recognized someone she went to high school with and stopped to talk to her. When she left a coworker asked the woman who she’d been talking to.

“She’s the reasons we have these jobs here,” she said.

LANETT — Some new street signs have been going up in Lanett specifically on North Lanier Avenue. “It’s part of... read more