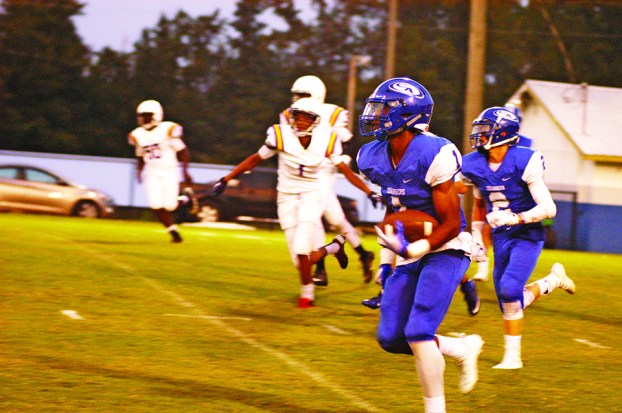 Wayne Clark | Times-News PUNT RETURN: C.J. Lyons (1) is very dangerous with the ball in his hands. Above, he’s on his way to a 75-yard touchdown return versus Evangel Christian. He carried the ball only three times Friday night but had 75 yards and two touchdowns.

The Rebels look to be a team that has it all.

On offense, they have a powerful running game inside and outside and a tall quarterback who can spot the open receiver and get him the ball. On defense, they are absolutely suffocating.

“I thought we played hard, played well and a lot of kids got to play,” Coach Allen said. “We had too many penalties early in the game. That’s uncharacteristic for us, and we need to get it cleaned up.”

After an exchange of possessions, Chambers broke into the scoring column by going 89 yards in lightning-like fashion. C.J. Lyons swept off the right side for a first down on the Rebel 28. Jordan Gillespie followed that up with a long gainer off the left side, all the way to the Lion 48.

Payton Allen then connected with Gillespie on a pass down the home sideline to the Evangel 28. On the next play, Lyons got loose down the right sideline for the first score of the night. The 28-yard run made it 6-0 in favor of Chambers and the Rebels added two more points by turning something bad into something good. Allen ran back to retrieve a bad snap ran right and spotted Caydon Smoot open in the right corner of the end zone for an 8-0 Rebel lead with 8:32 left in the quarter.

After holding Evangel’s offense in check, Chambers extended the lead on a 75-yard punt return by Lyons. Simply stated, it was a thing of beauty. He fielded the punt on his 25, made the most of some good blocking to reach the sideline, and just when it looked like Evangel had him hemmed in, he made a great move back toward the middle of the field and easily outran everyone to the north end zone. Payton Allen’s PAT made it 15-0 at the 4:43 mark of the opening period.

The Rebels were in business once again thanks to an interception and a nice return by Colton Hand. From the Lion 27, it wouldn’t take the Rebels long to make the end zone. Some hard inside running by Harris got it inside the 10 and from there Gillespie raced off the right side for a score. The PAT failed, but with 3:42 still left in the opening period Chambers had a comfortable 21-0 lead.

On one of the more exciting plays of the night, Payton Allen intercepted the ball near the middle of the field at the Chambers 40, got outside containment and raced down the sideline for an apparent 60-yard score. A block in the back penalty put it back to the Lion 24. More penalties made it third and 26 near midfield. With Evangel expecting a deep pass, Allen handed the ball off to Lions off the right side of the line. Very quickly, the fleet back was in the secondary and outraced everyone to the end zone. A two-point conversion run by Harris made it 29-0 with 9:05 left before halftime.

Things went from bad to worse for Evangel on their next series. They elected to punt on fourth and long, and the center snap dribbled back toward the kicker. With the ball spinning to the kicker’s right, Harris pounced on it at the Evangel 31. A couple of plays later, Gillespie found a hole off the left side of the line and raced for another Chambers score. The PAT failed, but with 7:49 left before halftime the lead had ballooned to 35-0.

After holding the Lions to a punt, Chambers got one more score before halftime, going 66 yards with Harris doing most of the work. He battered the inside of Evangel’s defense on a number of plays and got points on a seven-yard run up the middle. Allen’s extra point made it 42-0 with 5:17 still left to play before halftime.

Chambers would add two more scores to make the final, 54-0.

Thankfully, the Rebels got through the game with no injuries. Next week, the Rebels will be on the road with their sternest test of the young season with a game against Abbeville Christian. Abbeville defeated Chambers in the state championship game a few years ago.

“I think we’re where we want to be for this point of the season,” Coach Allen said.

LANETT — Thursday afternoon marked a fresh start for the Valley Rams and Lanett Panthers. A day before the football... read more