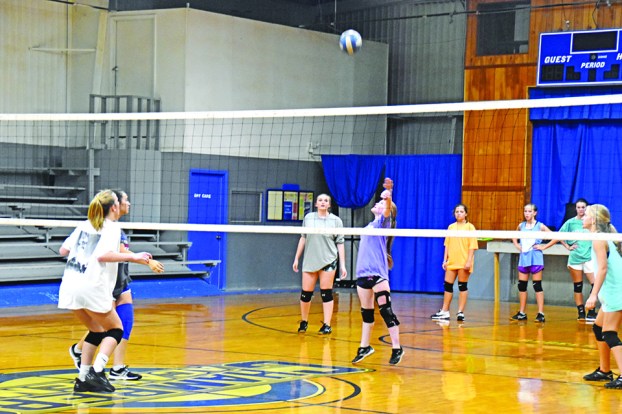 I GOT IT: One component that the Rebels have focused on this summer is being louder than new head coach Jaylan Reynolds while on the court. Photo by Rashad Milligan

LaFAYETTE — The Rebels volleyball team is wrapping up its fall practice before Thursday’s home opener against Edgewood Academy.

“I see a lot more cohesion now that we are getting into rotations and can start scrimmaging against each other,” first-year Chambers Academy head volleyball coach Jaylan Reynolds said. “It’s definitely been a learning experience for all of us, but we’re improving and getting better each day.”

During the team’s practice on Monday afternoon, the Rebels constantly communicated with one another, which cut down on confusion among the players. The communication stemmed from Reynolds’ rule that the team has to be louder than the head coach, who lost her voice from screaming during Monday’s practice.

In contrast to the amount of younger players on the team, the Rebels only have one senior on the team, J’Angelica Abney. She comes from beach volleyball, a game where one other teammate is on each side of the net as opposed to the five other teammates in court volleyball. Abney has adjusted well to the change so far, Reynolds said.

Reynolds was named the head coach of the program in June. Hitting has been the team’s largest improvement that she’s seen in the last two months. Passing has also improved a great amount.

“One thing that I was really focusing on was making sure that they had their proper techniques to hit as hard as they can,” Reynolds said. “The girls aren’t afraid to get down and dirty, slide on the floor when necessary, which is huge in this game.”

During practices, the 5-foot-10 Reynolds gets on the court and involves herself in some of the plays with the players as well. Toward the end of Monday’s practice, Reynolds was demonstrating to a player her blocking technique. The demonstrations have ended with positive results, Reynolds said, as two middle blockers blocked her during Monday’s practice.

“We’ve been doing vertical jump tests and I’ve seen improvement with that, even with our girls who maybe aren’t as tall,” Reynolds said. “You don’t have to be tall to block. I know a girl who’s five-foot-six[-inches] and can out-block me. It’s all about jumps.”

The goal for the first-year coach is to win multiple games, but to accomplish more during her time at the private school.

“We’re also cultivating these young women to go out in the world,” Reynolds said. “Making sure they have everything they need for that. Learning life lessons on the court that you’re going to use later on. Talking to somebody who’s over you, who’s your boss, who’s your coach. Getting them vocal about giving me feedback and making sure they’re receptive to positive criticisms, but of course winning’s always a good thing too.”

Chambers Academy’s first game on Thursday against Edgewood Academy begins at 4 p.m. CDT on the Rebels home floor. The team is also gong to play in the Lee-Scott Academy tournament this Saturday.

LANETT —It’s never too late to get better. After rehabbing with a new heart stent, 79-year-old Lamar DuBose was challenged... read more