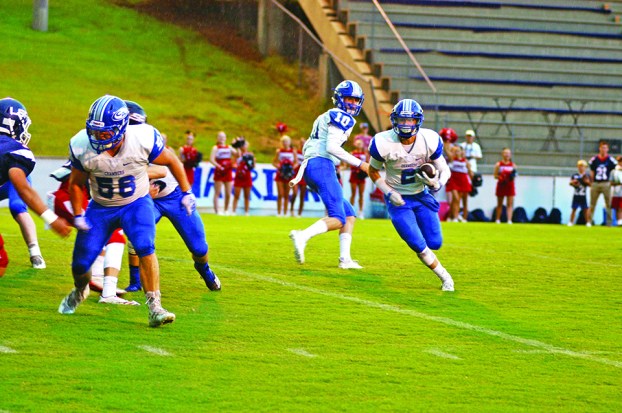 AUBURN, Ala. — The Chambers Academy Rebels got the 2018 football season off to a great start by overwhelming the Lee-Scott Warriors 41-0 on rain-swept Jud Scott Field Friday night.

Chambers dominated from the get go and pretty much could have named the score if they’d wanted to. After coming close for the past three years, Coach Jason Allen’s Rebels look determined to erase the heartbreak of making it to the state championship game three years in a row but falling short. Lee-Scott looks to be in for a major rebuilding year, or at least Chambers Academy made it look that way.

The Rebels received the opening kickoff and returned it to their 39. On the first play from scrimmage, the game looked to be a mismatch as senior running back C.J. Lyons took a pitch from sophomore quarterback Jason Allen and found running room off the right side of the line. He made a great cutback move near midfield and was off to the races. Sixty-one yards later and Chambers was up 6-0.

They went for two on the conversion and made it 8-0 when Jordan Gillespie got loose around left end and made the end zone.

After holding the hosts without a first down on their first possession, the Rebels appeared to have their second score on a long punt return by Lyons. It was negated by a block in the back penalty.

It mattered little as Chambers scored on the next play anyway. Allen found Gillespie wide open down the middle for a 68-yard touchdown pass. The PAT was blocked, but with 9:51 still left to play in the opening period, the Rebels were off and running, 14-0.

Chambers would have their third straight touchdown drive moments later, chewing up most of the yardage with their strong running game. Senior running back Hayden Harris scored from in close and made it into the end zone on the two-point play to run the score to 22-0 with 4:17 left in the quarter.

A long punt return by Gillespie put the Rebels in great field position on their next possession, at the Warrior 44. Lyons broke free off the left side for an apparent scoring run but was ruled out of bounds on the Lee-Scott 19 on the drive’s first play. Lyons then ran off the left side to the Lee Scott five on the final play of the quarter.

On the first play of the second quarter, Hayden scored on a run up the middle to make it 28-o. A try for two points failed, but with 11:53 showing before halftime, Chambers held a commanding 28-0 lead.

Things went from bad to worse for Lee-Scott on their next possession. With a steady rain coming down, an errant throw by the Lee-Scott quarterback went into a host of players with Chambers Academy’s Jake Waldrop picking it off on the Warrior 20. Two plays later the Rebels put another TD on the board, this time on a pass from Allen to Colton Hand in the left corner of the end zone. Allen kicked the extra point extending the Rebel lead to 35-0.

Late in the half, the Warriors mustered a long drive against the Chambers reserves but were denied the end zone. The ball went over on downs inside the five with less than 20 seconds left in the half.

With the outcome decided and the game being played in miserable conditions, the final two quarters were shortened considerably with the officials running the clock with a little stoppage. Chambers did add one more score to make the final 41-0.

With the impressive win, Chambers has now won 25 consecutive regular season games. That ties a local record set by the Arthur Bennett/Roddie Beck Springwood teams of the mid-1990s. The Rebels can break that record this coming Friday with a home game versus Evangel Christian.

With the way they looked last night, this Rebel team is going to be hard to beat by any team in AISA ball. This could be the year they finally win that football state title that has eluded the school for so long.