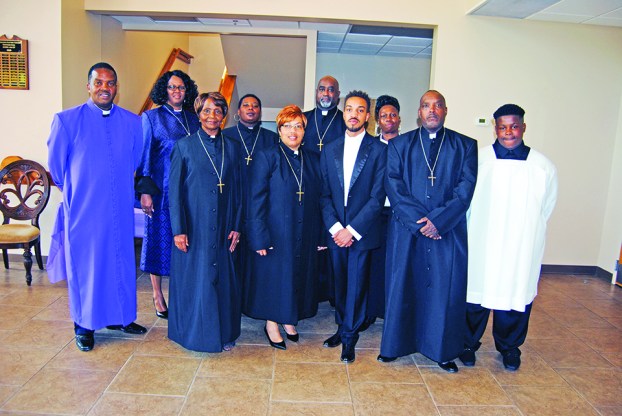 Wayne Clark | Times-News BACKING THEIR PASTOR: A large number of members of the Anointed by Faith Church, LaGrange, were at Bethlehem Baptist Church in West Point Sunday afternoon to show their support for their pastor, Tifton Dobbs, who was consecrated as a bishop in a ceremony presided over by Bishops A.J. Freeman, Larry Martin and Frank McLeod. Dobbs has previously served as the Lanett chief of police and is the owner of Dobbs Transportation & Travels. From left. are Tifton and Daphne Dobbs and Ministers Sylvia Cameron, Tawana Davis, Ann Griggs, Randy Mayes, Kadarius Griggs, Sylvia Moore, Otis Cameron III and Jaylen Maddox.

WEST POINT — Tifton Dobbs is a 21st century Renaissance man. He’s done a little bit of everything. He’s attended Columbus State and Jacksonville State universities, has numerous law enforcement certifications, was a police officer for 20 years and was the Lanett police chief at one point. He’s a musician of some note. He plays the organ, keyboard, piano and loves to sing.

Dobbs has been a husband and father for going on 20 years now. He and wife Daphne are raising seven children: Dana, Kenyatta, Nikki, Jessica, Dee, Gabriel and (the late) Tifton R. Dobbs Jr.

Dobbs just doesn’t piddle around with music. He’s really quite talented. He’s been a musician for 35 years and has opened for such noted artists as Shirley Caesar, Dottie Peoples, Donnie McClurkin, the Williams Brothers, Lee Williams, Dorothy Norwood and Doc McKenzie, just to name a few. He’s also released a CD entitled “Jesus is Well.”

A crowning achievement in his life came Sunday afternoon at Bethlehem Baptist Church when he was consecrated as a bishop in his faith. A large gathering was present at the local megachurch to witness the investiture. Taking part in the ceremony were Anointed by Faith Bishops A.J. Freeman of Ohio, Bishop Frank McLeod of Auburn, Ala. and Bishop Larry Martin.

Also offering testament to his works at the 3 p.m. program were Pastor Calvin Marshall and Bishop Dr. Bertha Hodge.

“Pastor Tifton Dobbs is a great man of God who loves the Lord, his family, his life and his ministry,” said narrator Karmen Cofield. “He has exemplified a unique way of reaching the lost. His vision is to grow God’s kingdom and lives by the meaning of Matthew 6:33 – ‘Seek you first the kingdom of God and his righteousness, and all these things will be added unto you.’”

LaFAYETTE — The LaFayette Bulldogs dropped a hard-fought pre-season game on Friday to the Handley Tigers by a score of... read more