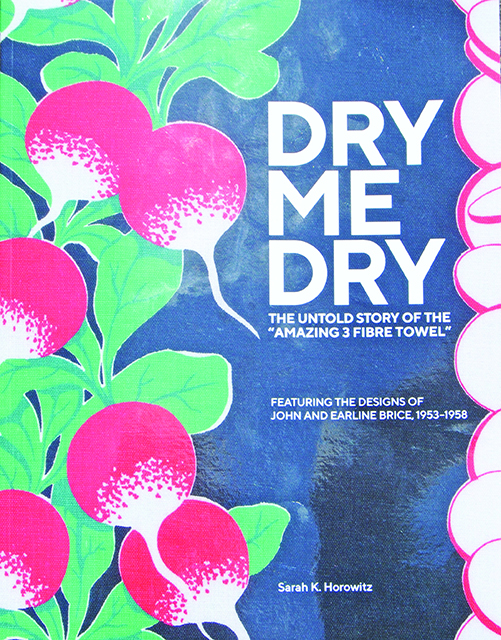 VALLEY — When textile workers at Fairfax and Riverdale mills were making Martex Dry-Me-Dry towels in the 1950s, little did they know that a half-century later the towels would be highly prized collector’s items and that a book would be written about them. If anyone has some of them stored away in a closet or an attic it’s a good idea to hang onto them. In good condition, they are worth good money to collectors.

The new book “Dry Me Dry, the Untold Story of the ‘Amazing 3 Fibre Towel’ Featuring the Designs of John and Earline Brice, 1953-58” by Sarah K. Horowitz was published earlier this year and released on June 15 to honor the 80th anniversary of the Dry-Me-Dry patent. Copies of the book may be purchased on Amazon.com.

Valley resident Lanny Bledsoe provided input into the new book. In researching the new book, Horowitz contacted Bledsoe by email. Bledsoe told the Times-News that he was most surprised to receive the communication and that anyone at this late date would be interested in products manufactured by the West Point Manufacturing Company more than 50 years ago. In the book’s preface, Horowitz thanked Bledsoe on having been her “voice of generations of mill workers who labored to make textiles for West Point Manufacturing Company, including Martex Dry-Me-Dry towels.”

Another local contribution was made by Cobb Memorial Archives, whose staff loaned a Dry-Me-Dry towel to be photographed for the book.

In the 1950s, Dry-Me-Drys were well known among American homemakers, who valued them because of their capacity to stay lint-free and as the name suggests, would dry very fast after being wet. This was due to the three-fiber blend of cotton, rayon and linen.

Horowitz, who lives in the San Francisco Bay area, maintains that Dry-Me-Drys were already popular with consumers when industrial designers John and Earline Brice of New York City were instrumental in taking them to a new level. The couple met at Macy’s Department Store and were on their way in the design field when the Martex division of West Point Manufacturing Company hired them to design fresh, modern patterns in bold colors. Two of their Dry-Me-Dry designs were included in an exhibit at New York’s Museum of Modern Art in 1953.

“The show was called Good Design, and items were chosen based on their appearance, utility and price,” Horowitz said. “Researching Dry-Me-Dry dish towels reminded me to cherish the hard work of those who designed and manufactured the objects we love so much.”

Horowitz has collected Dry-Me-Drys since 2001 and has more than 180 of them. They debuted in 1935 at 25 cents each. Today, vintage Martex Dry-Me-Dry dish towels cost upwards of $50 each.

“Without their expertise, there would be no Dry-Me-Dry towels,” she said.

UPDATE: Troup Sheriff has apprehended one, still searching for another escaped inmate

LaGRANGE — The Troup County Sheriff’s Office is still searching for a Troup County Jail inmate who escaped from the jail... read more