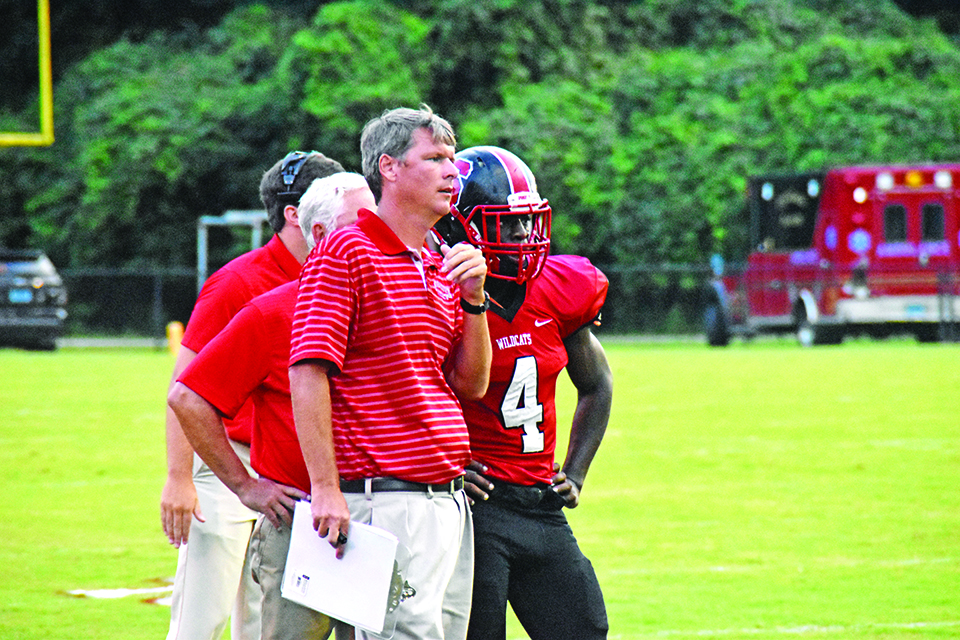 CALLING THE SHOTS: New Springwood School head football coach John Gartman talks to sophomore running back O.J. Tolbert on the sideline in the first half of the Wildcats’ season-opener on Friday night. Photo by Rashad Milligan

LANETT — John Gartman led Springwood School to a victory over Success Unlimited Academy in his head coaching debut with the Wildcats, 23-12.

Gartman didn’t feel the best about the win, however.

“Not very good,” Gartman said. “I was glad we won but we did not play well and like I told the kids a second ago, that was the worst coaching job I’ve done in my career. We’re going to come back Monday focused and we will be a better football team next Friday.”

Springwood debuted Gartman’s Wing-T offense on Friday night and showed the time possession control the formation can have from the first drive of the game.

The Wildcats then switched the play calling up when junior quarterback Jordan Plank completed a deep pass to junior tight end Coleman Hull with 7:30 remaining. The Wildcats found themselves inside the five-yard line before racking up three consecutive penalties to back the team up to the 22-yard line. Plank eventually took a shot at the end zone on fourth down but the pass attempt to senior Trent Craft was incomplete for a turnover on downs.

The first snap in Success Unlimited’s history was a botched snap that rolled into the end zone for a safety.

“It gave us two points and a little bit of momentum,” Gartman said.

After going three-and-out on offense, Springwood got possession of the ball again after Tolbert recovered a Success Unlimited fumble on a punt return with 1:57 remaining in the first quarter.

The turnover resulted in a touchdown run from senior running back Dylan Anderson to bring the Wildcats to a 9-0 lead to end the first quarter.

Anderson returned to the end zone again after punching the ball in on the goal line with 3:03 to go in the second quarter.

Hull scored the last touchdown of the night for the Wildcats after recovering a fumble in the end zone with 1:10 left in the third quarter.

The Wildcats return to Springwood Stadium next Friday night against Cornerstone Christian.

“We should’ve played a lot better,” Gartman said. “I’m glad we won, of course, but it wasn’t
as good as it should’ve been.”