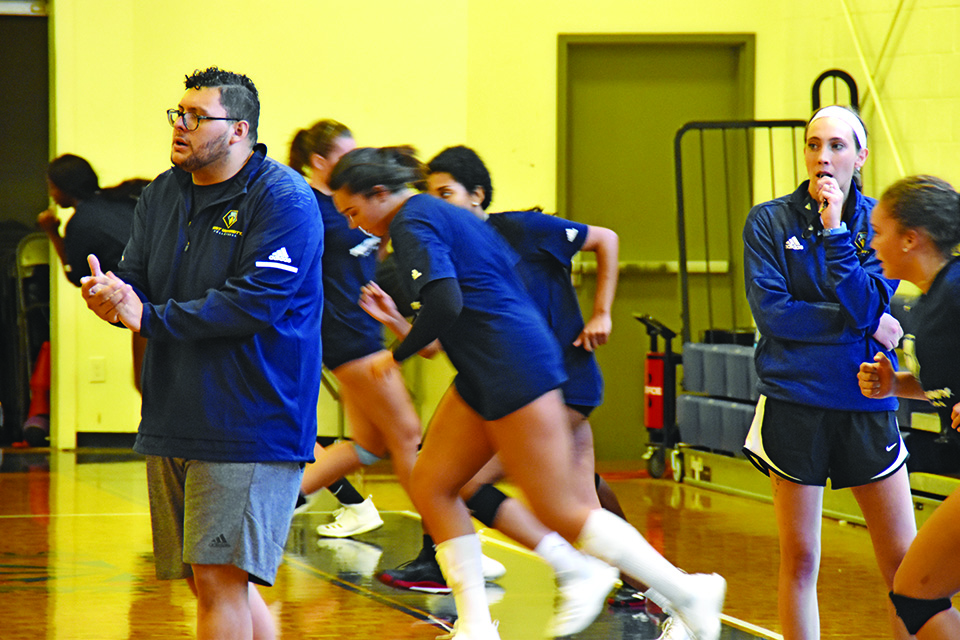 WEST POINT — The Point University volleyball teammates were gasping for air, freshman and seniors alike, as they stood with their hands on their hips alongside the east sideline of the West Point Park Gym.

“Ten seconds left,” Point University head volleyball coach Amanda Jones said to the athletes, who had gotten into a ready position. Jones counted down from five, then blew her whistle.

The players raced down to touch the other baseline before repeating the process, all under 18 seconds. The team had 30-second breaks in-between sets and repeated the exercise 18 times. The drill was called the Montreat Challenge.

In the team’s two-week preseason training period, the Skyhawks complete a different challenge for every team in the Appalachian Athletic Conference (AAC). All of the challenges have not been physical, however, some of the tasks were mental exercises that the Skyhawk players had to do.

“We like [to think that] before we’ve even played them, we beat them,” Jones said after Monday morning’s practice. “We’re really big into mental toughness. We want that walking into the game that we’ve already beaten Montreat, we’ve already beaten Reinhardt so we’re mentally ahead of the game.”

The Point University volleyball team was picked to finish third in the AAC this season, the highest preseason ranking the Skyhawks have received since Jones came on board in 2015. The Skyhawks posted a 19-9 overall record last season, finishing 13-5 in conference matches.

“I thought a lot about us being preseason third,” Jones said. “I knew that we were going to have to be mentally tough to take that. I think in year’s past, we’ve been able to beat people who had no idea we were coming, so we got to use that element of surprise and that’s just not there anymore.”

On the court during Monday’s practice, other players were encouraging their teammates to keep going and not to quit with only a few sets left. After the final set, the players laid out on the court from exhaustion. One player laid her head on the bleachers to catch her breath as assistant coach Carlos Soler approached, jokingly asking if she was praying. “In the preseason, we read the Bible every day,” Jones said. “We read to know God more and it’s constantly in my mouth. It’s constantly what I’m talking about because I feel like if they know  their worth as a child of God, then volleyball is just icing on the cake.”

Point opens its season at Coastal Georgia on Friday at 1:30 p.m. EDT. The Skyhawks’ first home game is on Sept. 7 against Faulkner University at 6:30 p.m. EDT. at the West Point Park Gym.