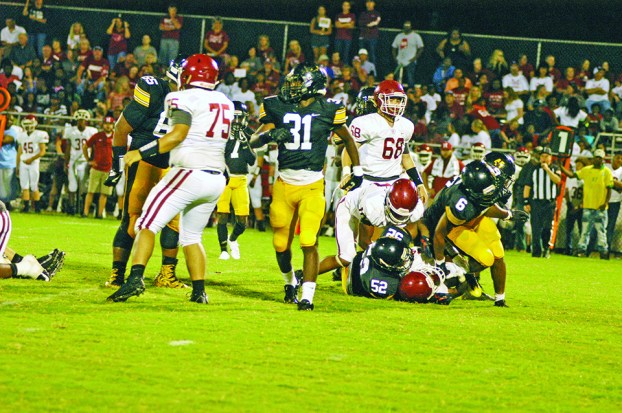 A HARD-HITTING GAME: The LaFayette Bulldogs and Handley Tigers had a hard-hitting game Friday night at Bulldog Stadium in LaFayette. The visitors from Roanoke came out on top, 24-18, but both teams had much to be encouraged about. It was a pre-season game for both teams. Above, LaFayette’s Tayshaun King (52) and Zachaeus Turner (6) tackle the Handley quarterback for no gain. LaFayette will open the season at home next Friday versus Lanett. Wayne Clark | Times-News

LaFAYETTE — The LaFayette Bulldogs dropped a hard-fought pre-season game on Friday to the Handley Tigers by a score of 24-18. “It felt like a third-round playoff game,” LaFayette head coach James Lucas said. “Handley’s really good. I think they’re going to have a good season this year. It’s 4A versus 2A, but the way we look at it, if you want to be the best you have to play the best.”

The Bulldogs got outstanding performances from senior quarterback Jaelin McCurdy, who had a 70-yard touchdown run to boost his team to a 12-6 halftime lead. Junior defensive back Keandrae Peterson intercepted a pass and returned it for a score to account for the second LaFayette touchdown of the first half.

After the visitors rallied for two touchdowns in the third period, McCurdy led LaFayette on a long scoring march to tie the game at 18. He fired a long pass to Jordan Walker to get them in close, at the Handley 20.

McCurdy then connected with JuQuavian Boston-Gaines to get LaFayette inside the 10 with a first and goal. On third-and-goal from the four, McCurdy ran right on a run-pass option, and with Handley defenders closing in on him fired a perfect pass to freshman receiver Vinay Singh in the corner of the end zone.

That tied the score at 18 with 4:43 left in the third period. A two-point conversion run came up short, leaving the score unchanged.

Handley had a long kickoff return to set up what be the game-winning score. They scored on a short run on the final play of the third quarter to re-take the lead at 24-18.

The two-point play failed, leaving the Bulldogs only six points behind.

There would be no scoring in the fourth quarter, and Handley escaped with a six-point win.

Two years ago, the Tigers won the 4A state title, but last year slumped to 2-8. They are looking to have a bounce-back year in 2018.

“It was good for us to play a team like Handley,” Coach Lucas said. “It will help us get ready of Lanett next week. We had a big crowd at the stadium tonight. The fans were really into the game, and we like that. It felt like a playoff game.”

LANETT — The Springwood School Wildcats controlled the tempo of the game from the start. On Friday night, the team... read more