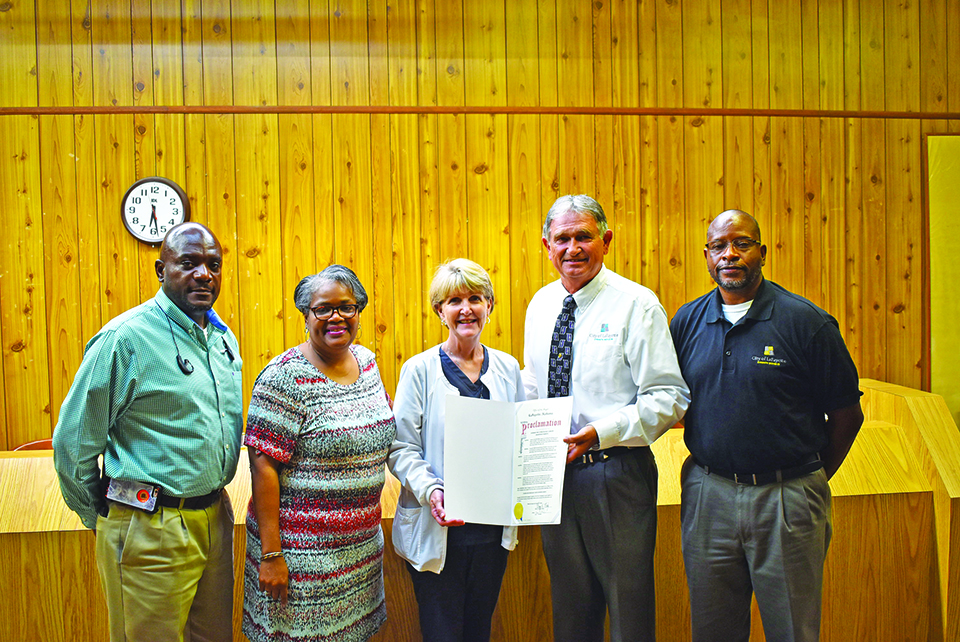 LaFAYETTE — The American Cancer Society ranks ovarian cancer fifth in cancer-related deaths among women. Women have a one-in-78 chance of this diagnosis during their lifetime and, because of this, local activist group Teal Magnolias are doing something about it.

Faith Community and Oncology Nurse and Teal Magnolias member Linda Parker was at the LaFayette City Council meeting Monday, updating those in attendance on what her group will be doing during September.

To raise awareness for ovarian and other GYN cancers, Teal Magnolias will be covering the city of LaFayette with teal bows and tips on how to identify the illness before it is too late.

“This time every year we have awareness for GYN cancers, especially ovarian,” Parker said. “Ovarian cancer is very difficult to diagnose, so education and awareness is very important.”

To legitimize their cause and help spread the word, LaFayette Mayor Barry Moody and the rest of the council voted unanimously to proclaim September “Ovarian and Gynecologic Cancer Awareness Month.”

“The good health and well-being of women in our city and state are enhanced by increased awareness about ovarian and gynecologic cancers and their symptoms and treatments,” the proclamation reads. “It is critical for women, physicians and all healthcare providers to recognize the risk factors and symptoms of [these] cancers and to remember the importance of early detection.”

Teal Magnolias are based out of Oak Bowery United Methodist Church and formed in 2013, when the late Nan Galik, a nine-year survivor of ovarian cancer, set out to create an educational support group for women who had been diagnosed and their supporters.

“The goal was to support women with a diagnosis of ovarian or GYN cancer, but also to educate women so they could advocate for themselves,” Parker said. “It is common that these cancers are discovered in advanced stages due to signs and symptoms that are missed. It was a great dream from a driven woman, so Oak Bowery and our Faith Community Nurse ministry set out to see this dream come to pass.”

Losing Fawbush to ovarian cancer this year, Parker said this September is dedicated to her memory and will honor her, as well as support every diagnosed woman’s fight against the disease.