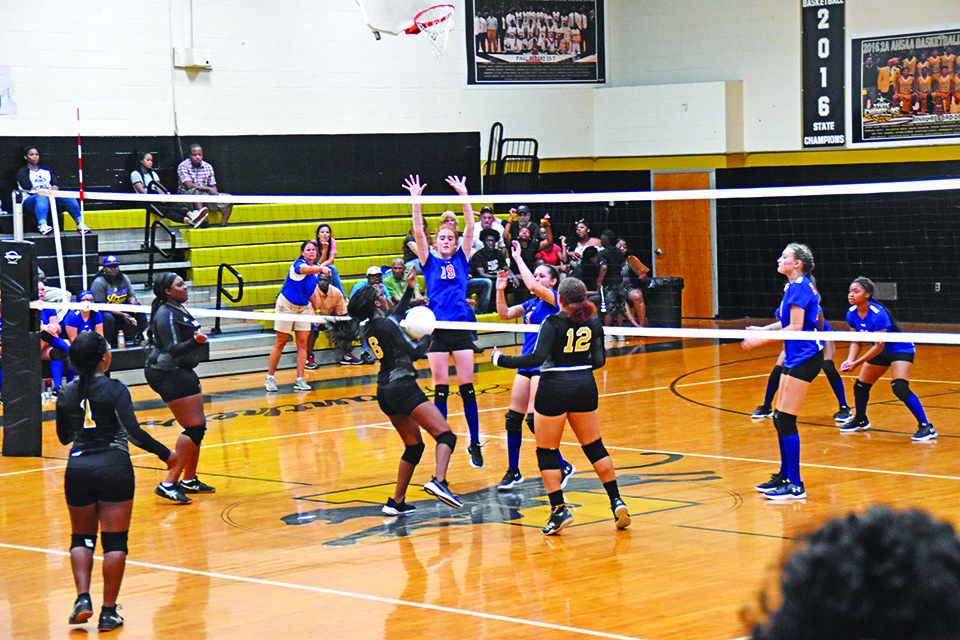 CROSS TOWN RIVALS: Valley and Lanett High School will face off against aginst each other again next Thursday at Valley. Photo by Rashad Milligan

A day before the football season opener between the two school was the first volleyball matches of the season for the junior varsity and varsity squads on the Panthers home floor.

Before the season started, head coach Krisse Story encouraged the community to come out and support the team the way other successful Panther teams like the boys’ basketball and football teams have been supported in recent years.

The community accepted Story’s challenge and came out in full force for both matches.

“I’m excited,” First-year Lanett JV volleyball head coach Kawana Tucker said. “This was a big win for us against a rivalry school, first game. We have some pretty young girls and I’m glad that we pulled it out.”

The Panthers came out with a lot of energy in the first set, with the crowd behind them after each point the home team scored.

The Rams didn’t get down on themselves easily, however, as Valley punched Lanett in the mouth early in the second set with a 7-2 start. The Rams remained composed as the Lanett sideline grew quiet and Valley ended up taking the set by a comfortable margin.

Before the deciding set, a Lanett parent came out on the floor and talked to the team for a moment. The varsity squad cheered on its younger JV players as the squad made its way back to the court.

Both schools fought for every point. The differential-margin never floated past three points in the set and the Panthers ultimately won after the two squads tied each other at 14. The Panther varsity members met the junior varsity teammates on the sideline with jumping hugs of celebration after the victory.

The win meant a lot to Tucker, the coach said after the match, because she’s also worked with a lot of the JV Valley players at W.F. Burns Middle School.

The crowd grew a little more for the varsity squads as the Lanett football players came to support the team after getting out of practice around 5:30 p.m.

“I can’t imagine a more exciting game to come out and beat our crosstown rivals,” Lanett varsity head volleyball coach Krisse Story said. “We’ve won a set against them before but we’ve never won a complete match so it was exciting and I think it was a big motivation for them. As exciting as it was, it’s not as important as our region games but this is definitely exciting and motivational for our girls who have been working all summer.”

One highlight in the varsity squad’s win was senior Rtianna Oneal catching fire in the second set by earning the Panthers three consecutive points as Lanett’s server.

“We really focus a lot on blocking in practice and actually seeing it work today, it really felt good to lead my team to a win that they’ve been waiting for all year,” Oneal said.

The volleyball Panthers and Rams are back in action next Thursday at Valley High School at 4:30 p.m.