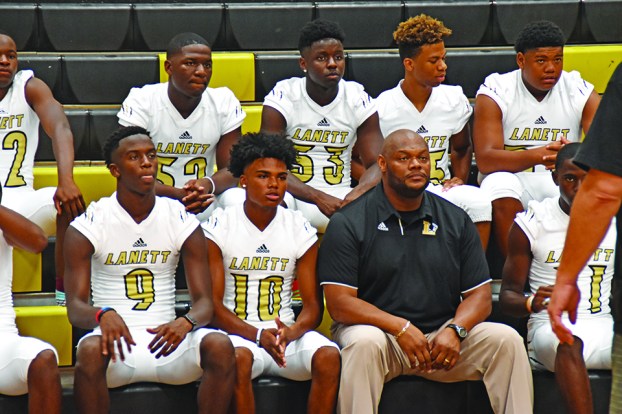 LANETT — The Panthers of Lanett High School have been ranked as the No. 1 1A football team in the state of Alabama.

The Alabama Sports Writers Association Class 1A’s position for the school is the program’s latest chapter in the defending champions’ tour this season.

“For the voters to feel like we’re that caliber of a program, I’m appreciative of it, but I knew we were going to have a target on our back even before the ranking came out,” Lanett head football coach Clifford Story, Jr. said. “We’ve been programming them [the players] since spring. [Telling them about] going down to 1A and that the expectation was going to go up for us. The kids are humble about it, they understand what we have to do. The games still have to be played for four quarters and we still have to be able to go out there every Friday night and compete at the highest level.”

The Panthers won all 15 games by an approximate average of 29 points during its 15-0 season in 2017. Lanett is losing four All-State seniors, Anquaevious Pollard, Baraskious Dowdell, Jawon Howell and Terrion Truitt from last year, but the team is bringing back three All-State players in Kristian Story, Trikweze Bridges and D’Terrion Glaze. The team has also welcomed running back B.J. Smith, a transfer from Valley High School, to replace some of the speed missing from last year’s seniors.

“I’m not surprised about the rankings, because of what we’re returning and what we had last year,” Story said. “Then to move down a classification, we’re just going to have to play football. [We] can’t take anyone lightly. We’re going to work the kids hard keep giving them adverse situations in practice so they understand that nothing’s going to be given to them and nothing’s going to be easy.”

Having an elite mentality in regard to the program has always been a focal point for Story and his staff, even when the team went 1-10 in 2010.

“It goes to my staff has always treated our program like it was a big school,” Story. “We never bought into being a small program. We’ve always done everything at the elite level as far as how we worked, how we dressed, everything we do has always been first class and we’re not going to change that.”

Lanett began fall practice on Monday afternoon at 5 p.m. EDT. The team’s first game is against Valley High School at home on Aug. 24.

LaGRANGE – It’s their final go-around. Madison McCartney and Kayla Lane have been playing alongside each other for nearly a... read more