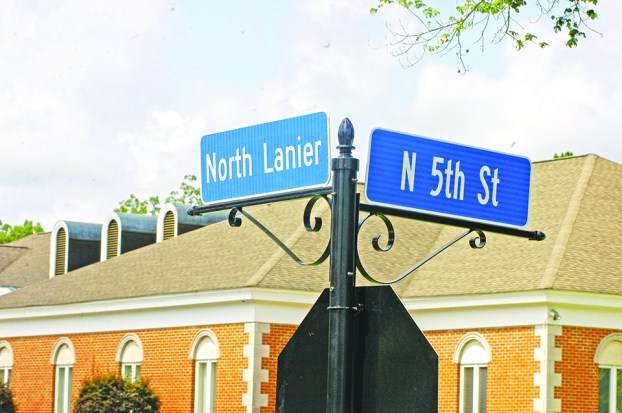 New street signs have been going up along North Lanier Avenue in Lanett. They help give an attractive look to the ongoing streetscape. Blue and white have been the standard city colors for some time. They’re on the city water tank in Jackson Heights and are now on the new street signs that have been going up, both on North Lanier and on Highway 29. The new signs on the busy four lane are above the road and lighted at night.

LANETT — Some new street signs have been going up in Lanett specifically on North Lanier Avenue.

“It’s part of the downtown revitalization,” Mayor Kyle McCoy told The Valley Times-News. “We’ll have some on the opposite side of the street when the power lines come down.”

The lines are either being moved behind the downtown buildings or will be placed underground. There will be no above-ground utility lines along North Lanier from city hall to downtown when the streetscape is complete.

“There’s a new section of sidewalk that will be going in next to Jackie’s Beauty Shop in the downtown area,” McCoy said. “When that’s finished we’ll be ready to pave the portion of First Street that needs it. All the crosswalks have been completed, and when the street is paved Phase I will be completed except for the installation of a new fountain on the triangle and the placement of the Bluffton-Lanett historical marker on the tip end of the triangle.”

On Monday, the Lanett Electrical Department moved some overhead lines at the corner of Gilmer Avenue and South 12th Street to put in one of the new lighted signs at that intersection.

The blue and white signs are becoming something of a Lanett trademark.

“You know you are in Lanett when you see them,” the mayor said.

McCoy said he’s concentrating on getting some street paving done before the weather turns cold.

“We’ve got a good bit to get done on both sides of town,” he said.

One of those paving projects is the section of North 15th Street that runs in front of the new Point University Living Community. The student housing area is looking good right now. Ponder’s Nursery has done a nice job with the landscaping out front, and there’s an impressive blue and gold sign on the property that gets across that “this is Point.”

Grant money has been approved for Phase III of the streetscape. There will be a bid opening in September, but it may be 2019 before work starts. This will continue the streetscape look on the east side of North Lanier to the Georgia state line. The city will be working with business owners on the design.

“For the rest of the year I just want us to get some street paving done,” the mayor said. “I think everyone will feel a lot better when this gets done.”

VALLEY — The final suspect being sought in connection with a West Point murder was arrested Tuesday, Aug. 21. Trent... read more