Lanett volleyball hopes to clean up flaws in 2018 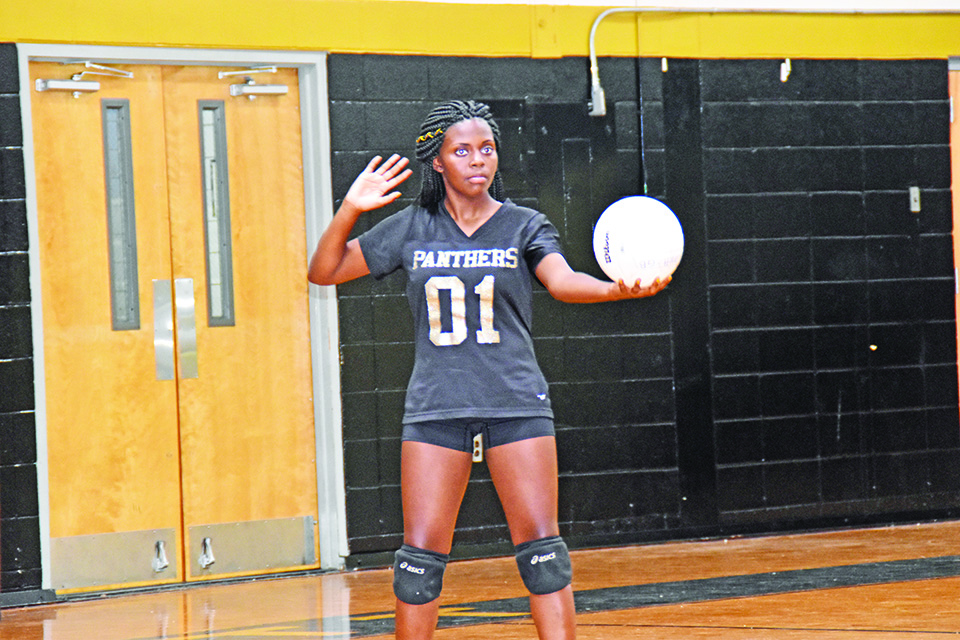 SERVE: A Lanett varsity volleyball player prepares to serve the ball during a team practice on Thursday afternoon. Photo by Rashad Milligan

LANETT — The Lanett High School volleyball Panthers are working to have a better season in 2018 than they did in 2017.

“Our varsity has improved,” Lanett head volleyball coach Krisse Story said. “We have five seniors and four of them have played before. We definitely should be further along than where we are, but I do see improvement.”

The varsity and junior varsity squads came together on Thursday afternoon for a joint practice in the gym after the first day of school. Many serves struggled to reach the other side of the net or stay in bounds, but teammates still cheered one another on instead of allowing frustration to mount.

“I do see that hunger and excitement, they do have that, but we definitely have room for improvement,” Story said. “I think we’ll see that, because we’ve worked hard all summer long.”

Outside of two band members and a senior having a prior engagement, the entire team was engaged during the practice with determined looks, wanting to perform better. The determination has been a common theme among the team this past summer, according to Story.

After an hour and a half of warm-ups and drills, the junior varsity and varsity teams played in a scrimmage against each other.

In the first set the varsity team, without its senior setter, got off to a slow start, but eventually began to develop a rhythm and forced a JV timeout when varsity cut the deficit to four points. After an impressive point to make the score 15-10, JV head coach Kawana Tucker ran up to hug her middle blocker in excitement. The team’s energy continued to rise the closer they get to claim the first set.

“Ace! Ace! In your face!” the JV group yells at the older players on the other side of the net after taking a 17-11 lead.

The two teams began trading points as the JV team, with at least five more fresh players on the sideline than the varsity team, began to cheer on their teammates to seal their deal in the first set. JV eventually took the set with the unofficial score of 25-17.

“It was extremely frustrating to lose to our JV, but it was a morale booster for our JV definitely because those girls are really young,” Story said. “We have a lot of seventh graders and eighth graders who have never played before. That’s a great bunch of girls athletically, track and basketball. It was a morale boost. But for our girls, it was a wake-up call that we’re not where we need to be. You can never feel like, ‘Oh this is just whoever the other team is.’ It won’t happen like that.”

The varsity team quietly jogged to the baseline of the court while JV celebrated the upset for a few moments. The varsity athletes ran the length of the floor six times with the junior varsity players cheering them on to finish strong from the bleachers.

The first game of the Panthers’ season is on Aug. 23 at 4:30 p.m. EDT. against Valley at Lanett. With the success of the other teams at the school, Story encouraged the community to support her team as well.

“I think it would mean a lot to the girls as well to see that people aren’t supporting a specific sport but they’re supporting ‘Champ High,’” Story said. “I know that as we win, our fanbase will grow, but just to have that encouragement of having people sitting in the stands saying, ‘I support you, even when you lose.’ It would mean a lot to them and I think it would cause them to grow even more.”