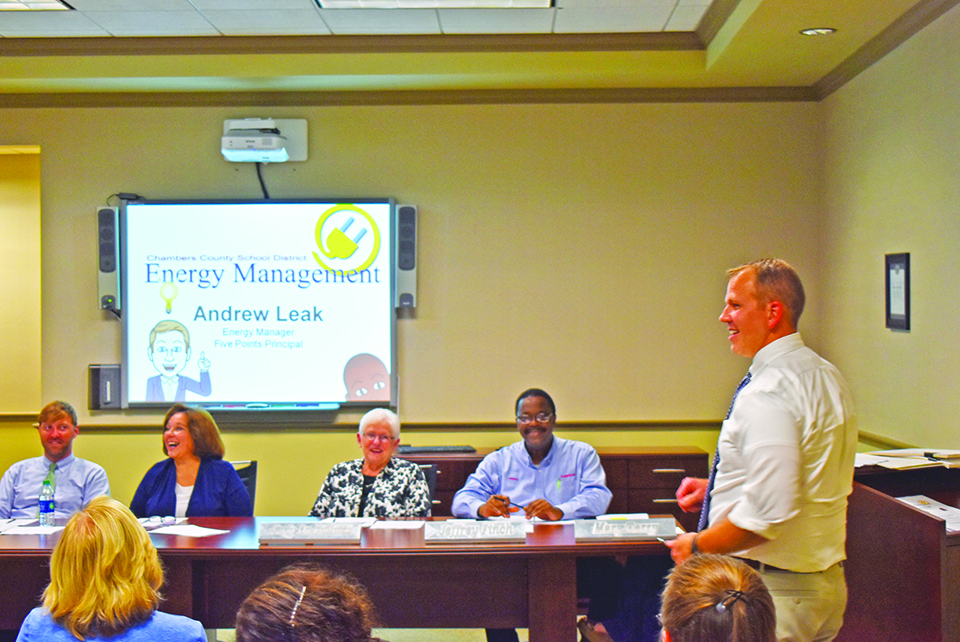 Leak does energy audits at the different schools in the area, giving them letter grades based on their compliance with the school system’s energy program put in place in 2007.

“This program, when we started off with everything before we got with Schneider, was based off of behavioral modifications,” he told the board. “[We focused on] the types of things that are really simple, the things our grandmothers told us to do, like turn off the lights when we leave a room.”

When the school system partnered with Schneider Electric in 2015 there were changes to the infrastructure of schools, including energy efficient windows, low-flow plumbing and remotely-programmable thermostats. The district’s ambition to continuously save on energy, however, didn’t change one bit.

“With [things like] monitor lights, even if we leave those on they do cost money, so if we have all the monitors in the school system on every day, those pennies add up,” Leak said. “[Turning them off] is how we got the savings we see today.”

Over the past 10 years, Chambers County Schools have saved 32.6 percent overall on energy cost, which translates to just under $4 million in saved expense. Leak said that the environmental impact of the energy saved was comparable to removing the emissions of 2,377 cars for a year, or planting 292,534 trees.

Last year alone, the district saved $421,783 and this year they hope to do more. Leak said that the focus now is on power waste, keeping on lights and appliances that drain energy without actively being used. He and Superintendent Dr. Kelli Hodge joked about teachers bringing in microwaves, toasters and even curling irons, things that aren’t allowed in the classroom and use extra energy.

“You see a little bit of everything in some of the classrooms, because it is pretty much home for them,” Leak said. “It seems sometimes like we spend more time at school than we do at home.”

It was also announced that Child Nutrition Director Montray Thompson would be assisting Leak with energy program audits and other duties in the upcoming school year, giving Leak more time to focus on being principal of Five Points.