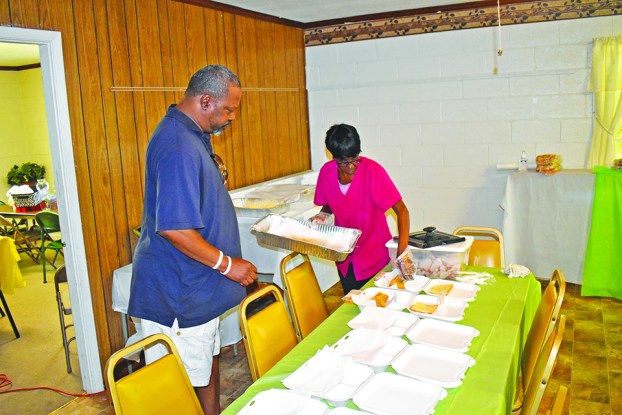 WEST POINT — Anyone driving down 10th street Friday morning or afternoon was greeted with the wafting smell of fried fish and barbecue chicken.

The smell was escaping from the small kitchen of Emanuel Chapel CME Methodist Church in West Point where Cassandra Hutchinson’s family was working hard, yet again, to prepare meals for sale to the public as part of their fundraiser for her.

Hutchinson is still in a diabetic coma and in a largely unresponsive, but improved since the last report, state as she has been since June 29. To raise money for her medical care, transport to and from the hospital for her parents and other costs that have accrued, her family has now held two barbecue events including the one on Friday.

“This is just something we do, we all come together to help out someone in the community who needs it,” said Shirley Bailey, a cousin of Hutchinson. “We do things like this for people all the time, this time it’s for family.”

Bailey had previously set up the largely successful barbecue plate selling fundraiser that took place last weekend, on Aug. 5. That day, Bailey and other members of Hutchinson’s family set up shop in the home of Margie McCullough, Hutchinson’s mother, which is located right across the street from Friday’s venue.

Last Sunday they ended up making over $1,500 by selling plates and taking donations from approximately 200 people that day. Since then they have set up an account for Hutchinson at Capital City Bank and decided to do it again.

“We had people lined up out the door, on the lawn, everywhere,” Bailey said. “We made it work, but we figured we could use more room.”

The back room of Emanuel Chapel gave them just that.

Although most people took their meals to go, tables and chairs were set up for a dining room experience. A deep-frier sat on the side of the room opposite the kitchen, with all the fixings in between for easy plate assembly.

As people came through to get a plate or two, Bailey took their donations and thanked them for helping the cause.

As of this report, there isn’t a final tally on the amount of donations raised at Friday’s event, but Bailey said anything and everything towards the cause is appreciated.

VALLEY — Through other media outlets, reports are circulating that the City of Valley was without EMS service on Thursday,... read more