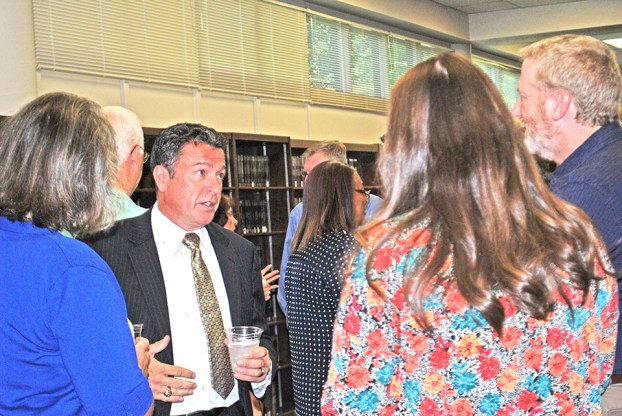 MEETING THE PEOPLE: New Southern Union State Community College President Todd Shackett speaks with members of the Valley community about his plans for the future of the school.

VALLEY — Todd Shackett has been making the rounds at Southern Union State Community College’s three campuses since the Alabama Community College System board of trustees unanimously voted for him to become SUSCC’s new president.

Shackett went to the Wadley campus earlier this week and is expected in Opelika today. He was also  in Valley Wednesday night shaking hands and rubbing shoulders with community members.

Shackett is filling the position after the college’s decade of interim leaders. At Wednesday’s event, he spoke with those involved with the school about how he will make a difference.

“We are looking forward to a good working relationship with [Southern Union],” said Valley Mayor Leonard Riley. “They haven’t had a president in 10 years, so they haven’t had leadership to move the school forward and to grow the school. The enrollment in the Valley campus has been down these past two years, I believe, and we would like to see that enrollment grow and continue to be a vital part of our community.”

Riley and other members of the community believe that change will indeed come not only thanks to steady leadership, but because of the pedigree Shackett holds.

“For the past three decades my diverse experience working in business and industry has convinced me of the importance that community colleges play in providing a path to a better future,” Shackett said in an ACCS press release after his appointment. “As a local businessman, I know first-hand the critical role Southern Union plays in the community and the important impact the quality education and training the college provides has on the local economy.”

The new president has more than 30 years of management experience in leadership positions, working for the past eight years at Opelika’s Baxter International most recently as Director of Operational Excellence, according to a press release from ACCS. Shackett has also served as an Executive Board Member of the Opelika Chamber of Commerce, Chair of the Auburn University Graduate School Advisory Board and even an Industrial Advisory Board Member at Southern Union, according to the same release.

“I feel like he is going to be an asset to our community,” Riley said. “He has worked in workforce development in Opelika for years and we need to do a better job [in that field]. I think he’ll do that.”

Bringing in a workforce-minded approach is what many believe will improve Southern Union’s Valley campus and overall curriculum as a whole. What will improve the entirety of the college, others believe, is his diverse mindset towards education.

Area students head back to school

LANETT — There were lots of smiling faces Thursday morning at W.O. Lance Elementary School. As students arrived for the... read more