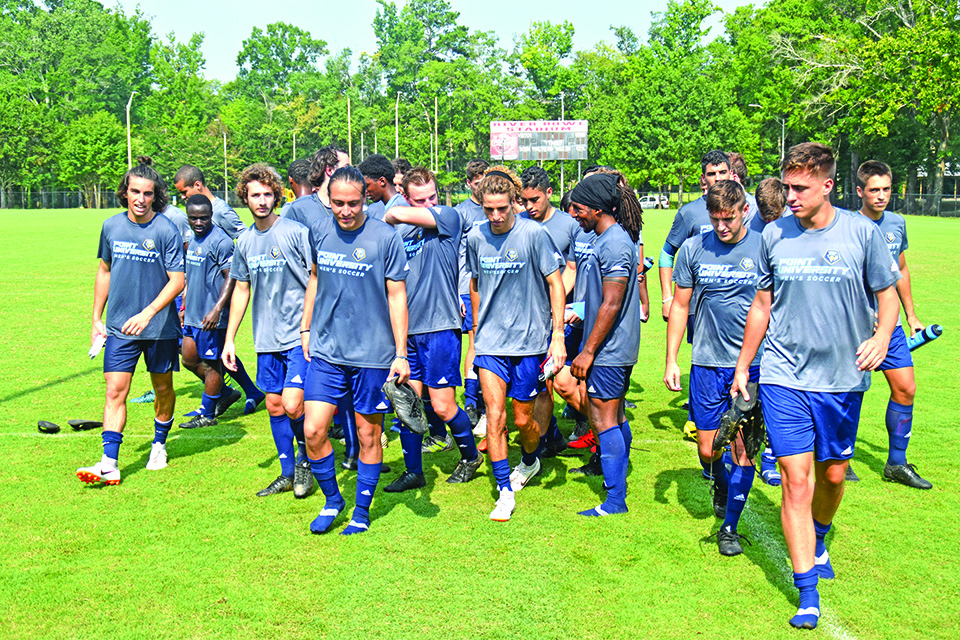 MELTING POT: This year’s Point University men’s soccer team, who have 20 international players, look to surprise some teams to finish in the top half of the conference this season. Photo by Rashad Milligan

WEST POINT — The Skyhawks of the Point University men’s soccer team were welcomed back to campus with a schedule of two-a-days.

“It’s always difficult because in this region of the country we try not to play too much during the day,” Point University head men’s soccer coach Jonathan Lenarz said. “They’re practicing early in the morning and late at night. The turnaround from late night practices to early morning a lot of times leads to muscular injuries. We have a few of those but we have really good depth this year so hopefully, the injuries don’t mean that much to us this year and so far, so good.”

Lenarz is in his third season as the head coach at Point. In 2017, the Skyhawks went 8-10-1 overall with a 1-8 conference record to finish in ninth place.

This season, the team was picked to finished 10th out of the 11 teams in the conference, according to a preseason poll. The team’s goal is to win 12 games out of 18 in the regular season and to finish sixth or above in the conference.

“That’s a minimum goal,” Lenarz said. “We’re going to take some teams by surprise, for sure. I have no doubt that we won’t be right there competing to the very last day of conference play for a spot in the top half.”

“We’re quite skillful in the midfield and we’ve got great depth in the center-forward area,” Lenarz said. “Those are strong suits for us. There’s going to be great competition for those playing spots. In the event of injury or if we want to rotate players to stay fresh during the course of a game, we’re going to have great opportunities there.”

The central defense and the wing area lacks the depth that the midfield offers so the Skyhawks plan to attack opponents by dominating possession time and scoring frequently.

This season’s Skyhawks are bringing in 11 new international players to go along with the team’s total 20 international players. Players on the team are coming from the United Kingdom, Columbia, Portugal, Brazil, Liberia, Bolivia, Spain, Netherlands, Argentina, with a select number of players from the southeast. There are 13 first-year players on Point’s first team.

“With those many new players and about five or six returning starters means that about half of your players on the field as starters are going to be new players,” Lenarz said. “Some of our more successful new players are young 18-year-olds from overseas. They’re adjusting to life in the United States here in West Point and Valley. If they can adjust quickly, we’ll be great but if they have days where they don’t play so well, that could affect us too.”

Off the field, the players are getting along fine. The team went down to West Point Lake and have also played well in scrimmages against other schools so far. Lenarz said his concern is how the young team responds to its first tough loss.

“I’ll know more then about how the team spirit is,” he said.

The Skyhawks open the season at home against Middle Georgia State College on Aug. 24 at 7:30 p.m. EDT.